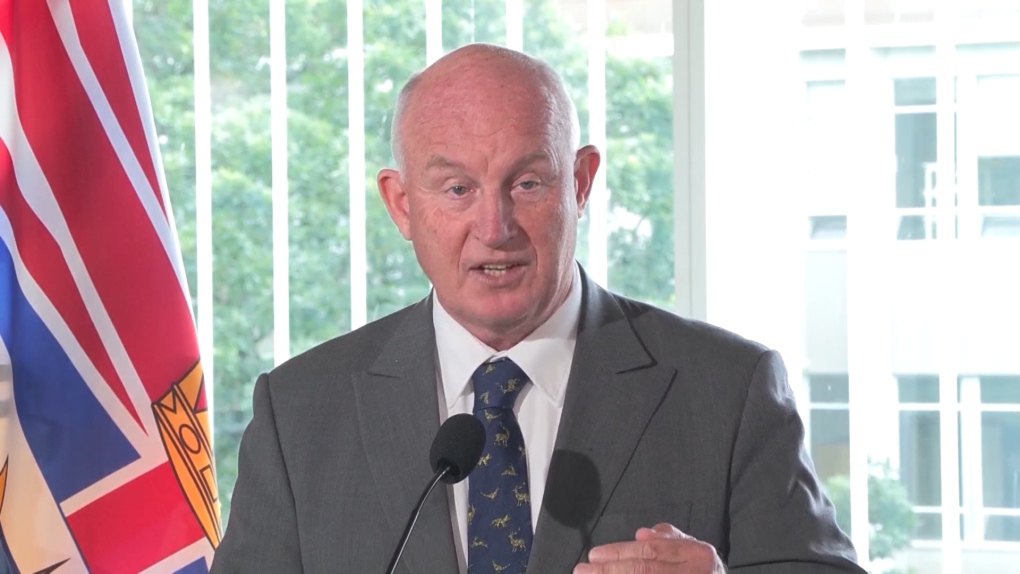 Minister of Public Safety Mike Farnworth is seen at a news conference on July 18, 2022.
Vancouver -

A review of British Columbia's COVID-19 response released Friday says despite being unprepared for the pandemic, the province showed “resilience, balance and nimbleness” during the emergency.

That's despite nearly 75 per cent of the people surveyed as part of the independent review reporting they didn't trust information coming from the government.

However, both the report's authors and Public Safety Minister Mike Farnworth say the online survey was not representative of the population as a whole and the results showed significantly more dissatisfaction than other public opinion research.

The review, which included meetings with 145 organizations and the survey with 15,000 respondents, made 26 findings including recommendations around better communication, transparency, data collection and improved public trust.

At a news conference, Farnworth said the government tried to be as open as possible during the pandemic and based its decisions on the best public health advice available.

“I think the approach that we took was the right one, but obviously we learned lessons from that and we welcome the feedback and report,” he said.

“What that will allow us to do is to be better prepared in the future. And we will always be looking at ways in which we can make improvements when it comes to maintaining the public's trust.”

The report says the level of trust in the government's response was very high in the initial stages of the pandemic, thanks in part to the daily media briefing lead by provincial health officer Dr. Bonnie Henry.

But, like in other provinces, that eroded, leaving the province in need of ways to rebuild.

The report says there is concern “that eroding trust may translate into more resistance to restrictions necessitated by the next provincewide emergency.”

Among steps that could help with public trust, the report suggests the government find better ways to explain why decisions are made and condition the public to expect change during emergencies.

They say establishing expert advisory panels would contribute to better explanations and suggest the amount of data released by the government did not adjust as quickly as it could have when growing case numbers meant less individual privacy concerns.

“The balance between privacy and transparency could be more regularly examined and clearly communicated, as necessary to maintain public trust,” the report says.

The review highlights a lack of provincewide health-care data collection infrastructure, which it calls “a long-standing issue for health-care system management and public health.”

In B.C., there are 37 different administrative IT systems in hospitals and health authorities, many of which are not able to exchange information with each other or with central systems.

When it came to personal protective equipment for hospital staff, the province was forced to create a new system to manage provincewide inventory, the report says.

Collecting hospitalization data was a “laborious daily manual exercise, affecting timeliness and accuracy” because of the system incompatibility.

There was also no ability to automatically track vaccinations on a provincewide basis, meaning a new system had to be created “in record time,” the report says.

“Government should consider how best to deal with the disparate set of IT systems, data definitions and data collection practices to ensure that the health-care system is able to assemble needed data that is timely and accurate,” it says.

Farnworth said many of the findings in the review are part of work already underway to prepare B.C. for future provincewide emergencies.

He said the province is now more co-ordinated, has a better understanding of supply chain concerns and is updating its pandemic provincial co-ordination plan.

“I think everything that we went through, both what worked and the challenges, are going to allow us next time to be better prepared,” he said.

This report by The Canadian Press was first published Dec. 2, 2022.

The independent body that oversees the safety of technical systems and equipment in British Columbia has found a deadly ammonia leak near Kamloops last May was a tragedy that took years to unfold.

Ottawa police and Bylaw Services are telling residents and visitors they will be taking a zero-tolerance approach to parking, noise and fireworks violations downtown this weekend, on the one-year anniversary of the 'Freedom Convoy' demonstration.