'I was blown away': Guitar from 1950s worth more than B.C. family imagined 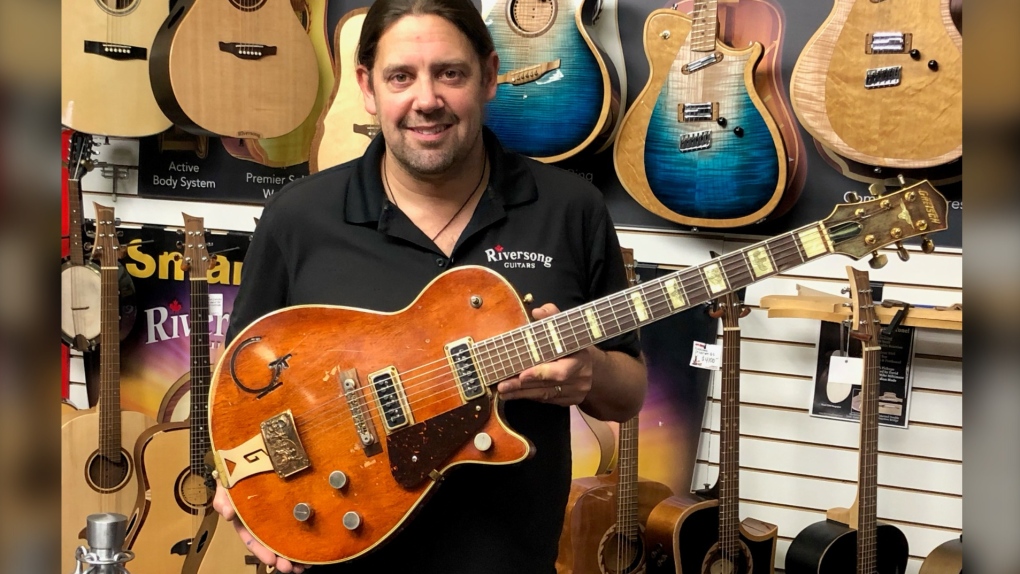 Mike Miltimore, seen in Kamloops, B.C., an undated handout photo, says the Gretsch electric guitar that a woman brought into his store is from 1955 and similar to one played by country music legend Chet Atkins before he developed his signature series of guitars. The Canadian Press/HO-Mike Miltimore

VANCOUVER -- When Renee Latheur decided to take an old guitar into a music store in Kamloops, B.C., she didn't expect the instrument that had sat in a closet for years to be worth thousands of dollars.

“It's in a ratty old guitar case. But I remember my aunt saying, 'I don't know what to do with this when I pass away.' ”

Sherrie Favell died in March, leaving Latheur wondering about the instrument and its connection to the woman she loved as an aunt even though they were not biologically related.

It wasn't until Latheur recently walked into the music store and saw the owner's eyes sparkle at the sight of the case that she began to learn more about the guitar and its value to Favell's father, who bought it nearly 65 years ago.

Mike Miltimore, who owns the store, said the worn tweed and leather case was a telltale sign that it may contain a unique instrument.

When he opened the case, he saw a Gretsch from the 1950s, featuring a big brass buckle on the top and a leather studded “belt” around the outside.

“It's a played instrument, you know. It's been loved. If it could talk, it would tell probably about hundreds of concerts played throughout its life,” Miltimore said.

He said his research from the serial number revealed the electric Gretsch, or Roundup 6130, was made in 1955 and similar to the instrument later played by country legend Chet Atkins.

“It's a hollow-bodied guitar and a lot of companies were doing solid bodies at that time,” Miltimore said, adding a hollow instrument was used for the country style of picking that Atkins popularized.

“I was blown away,” Latheur said.

She recently learned her aunt treasured the mahogany guitar that kept her connected to her father, Roy Favell, who played his beloved instrument in a band called McKinna Gold.

“He caught his hand in a planer at a mill in Salmon Arm and he actually had to retrain to play the guitar,” Latheur said.

Favell lost his thumb at age 21 but still managed to perform with it.

However, Favell inexplicably sold his guitar at a pawnshop. It was later rescued by Sherrie Favell and her mother, Latheur said.

Sherrie bought it back again when it was hocked a second time, Latheur said, and she kept it after her father died about 20 years ago.

Sherrie sometimes played the Credence Clearwater tune “Bad Moon Rising” on the guitar, but her prized possession spent much of its time hidden away, Latheur said.

This report by The Canadian Press was first published Nov. 30, 2020.