'I feel happiness now': Men stand up against suicide through art 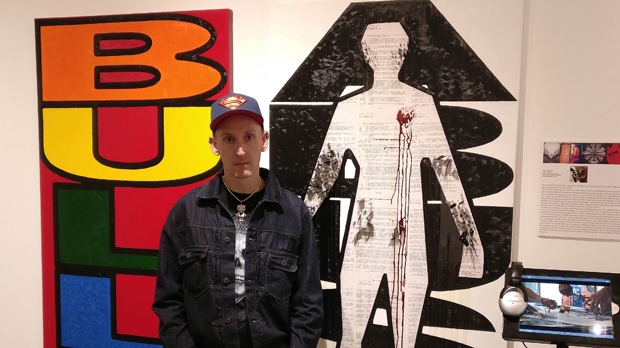 Jason Henriksen stands in front of his work in the exhibit "Still Here" at Vancouver's Gallery Gachet. (Handout). Nov. 6, 2016.

Bullying, depression, anxiety, cutting, anorexia, suicidal thoughts: For the first 30 years of his life, Jason Henriksen didn’t know what it meant to be happy.

It all began in Grade 5, when Henriksen began having feelings for other boys in his Fernie, B.C. class. He was bullied for being gay – sometimes violently - and began experiencing mental health issues, developed an eating disorder, cut himself up to 50 times a day, and had thoughts of ending his life.

“It was hell. I don’t know how to put it any other way,” the now 39-year-old Henriksen said, noting he dropped out of high school at 16 and was once told by doctors he would be a “mental case” for the rest of his life.

“Now things are excellent, and I can’t even believe I was the person I was. It’s so black and white.”

Gay and bisexual men are four times more likely to commit suicide than heterosexual men – a grim statistic one University of British Columbia group is determined to overcome.

This week, Henriksen was among 30 gay and bisexual Canadian men affected by suicide who had their art and photographs exhibited in a downtown Vancouver venue, Gallery Gachet. Entitled ‘Still Here’, the project is led by the Man-Up Against Suicide group, a UBC Men’s Health Research initiative.

“Part of the Man Up Against Suicide is to work with gay and bisexual men who have struggled with depression and suicide or who have lost a male in their lives to suicide,” said Foster Eastman, an artist and project facilitator.

“My job is to help facilitate and to create an art piece that tells their story… Art does open up dialogue, and makes people feel comfortable to talk about something that is very difficult to talk about.”

Henriksen laughs as he explains how prior to the exhibition, he had never considered himself “artsy.” Yet when a friend mentioned a project aiming to de-stigmatize men's mental illness, he knew he had to take part.

“Right away I was like, ‘Wow, this is something I really, really want to do – and the next thing I knew I was snapping pictures,” said Henriksen.

“This project really brought out my creativity. I wanted to do something profound.”

Several of Henriksen’s photos are displayed in “Still Here”, as well as two large canvasses depicting his experiences with bullying and abuse.

The pieces are profound: the abuse canvas, for example, is an outline of his body, razor blades circling his wrists like bracelets – a haunting testament to decades of self-harm. 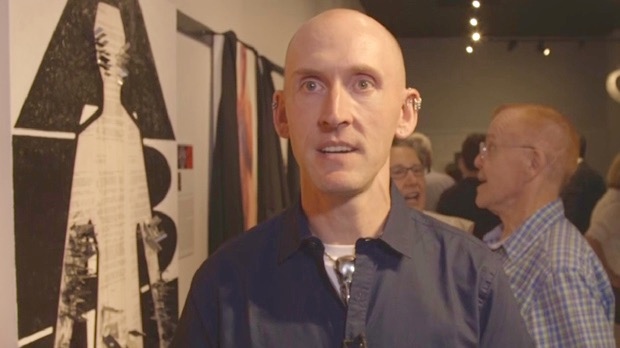 Jason Henriksen stands in front of his work at a recent art exhibition in Vancouver. (Handout).

“Everyone throws the term bullying around like it’s a common thing that everyone experiences,” he said. “But what they don’t realize is that if you’re being beaten up constantly, sexually assaulted – that’s just plain criminal abuse.”

Henriksen stopped cutting himself four years ago, and is currently thriving. He works at Positive Living B.C., an organization that helps people living with HIV, and wants to volunteer with youth who are struggling with bullying and mental health issues.

When asked what helped him overcome his once debilitating challenges, he credits a move to Vancouver, finding an amazing doctor, and most importantly his long-term partner Neil Self.

“I don’t know if I would be here without him, I put him through the hell I went through,” Henriksen said, glancing over at Self. “I wanted nothing more than to get rid of [my mental illness]. So I fought… But it took many, many, many years to get to the point where I’m at now.”

The couple met several decades ago a gay and lesbian group in the Kootenays. They will be celebrating their 20th anniversary on Valentine's Day.

“I’m really proud of him for doing this," said Self. "He’s come a terribly long way – it’s like night and day from when we first met. I’m so proud of him.”

Henriksen is proud of himself too. He hopes his part in the project will help even one person feel better –then he’ll feel like he’s accomplished something through his work.

“The reception for the project is awesome,” he said. “I did not expect any of this when I first started, so I’m very overwhelmed and very happy that I got involved with this… I feel happiness now.”

The “Still Here” exhibition will be running at Gallery Gachet from November 2 to 13 (open Wednesday to Sunday) 12 to 6 p.m. For more information, click here.