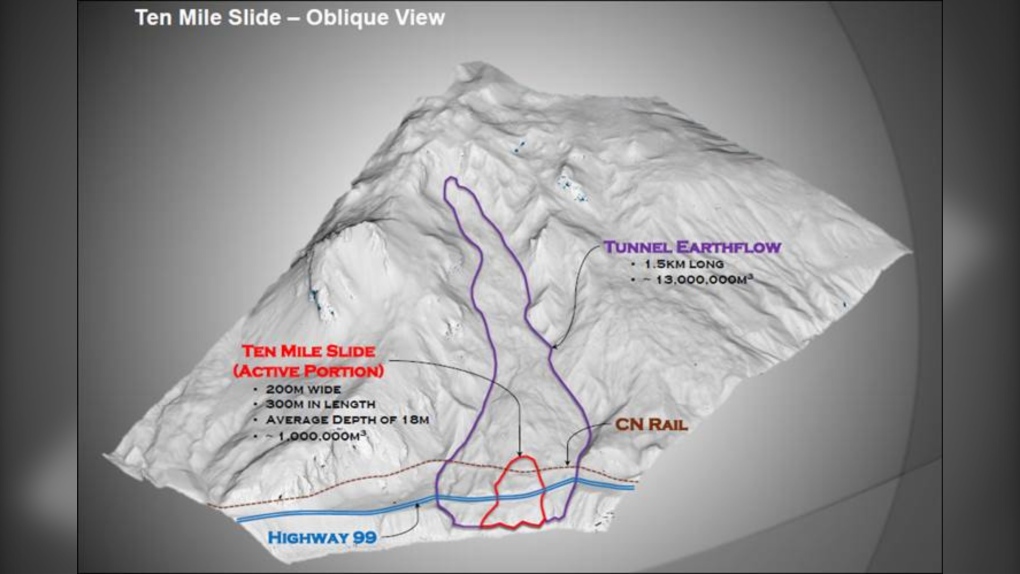 A graphic from B.C.'s Ministry of Transportation shows the Ten Mile Slide site.

VANCOUVER – A stretch of B.C. Highway reopened Monday following what the province describes as "slope activity" over the weekend.

In a statement Sunday, the Ministry of Transportation said it had closed a section of the highway about 10 kilometres north of Lillooet as a precaution.

"Accelerated movement over the last 24 hours at this historically challenging slide site has reduced safety, and the ministry has proactively closed Highway 99 between Fountain Valley Road and Sallus Creek Road," the ministry said.

Staff and geotechnical engineers used electronic equipment to monitor the activity at the Ten Mile Slide site, it said.

The highway remained closed Monday morning, but reopened to traffic after noon.

Drivers who rely on the route are asked to use highways 12, 1 or 97 as a detour. The highway eopened when the movement stopped and officials decided it was safe for travel.

The site is already the subject of a $60-million stabilization project, which the ministry says has had slides for several decades.

"This has severely affected the Xaxli'p community, local businesses, the trucking and tourism industries, and the general public," the ministry said.

Currently, crews are installing tied-back concrete and composite piles below the highway and hundreds of soil anchors above. The highway is also being reconstructed to two lanes with a guardrail, the province said.

The project is expected to be completed in the spring of 2021.

Last week, a rock slide prompted the closure of a northern B.C. highway for several days – with no detour available.

A section of Highway 51 about 20 kilometres east of Telegraph Creek was closed as crews completed an assessment then cleared the site.

Initially, officials estimated it would reopen Sunday, but it was still closed Monday morning. A post on DriveBC suggests it will open Monday afternoon for two hours, but will only be accessible to all-wheel-drive vehicles.