How worried should I be about my kids and COVID-19?

VICTORIA -- As COVID-19 extends its reach around the world at what may sometimes feel like a frantic pace, perhaps the only thing spreading faster is rumours and myths.  A key concern for parents – what does this mean for my kids?

She added they can also be "efficient transmitters" without getting sick themselves, but that's with influenza. There's still a lot that's unknown, but so far, she said, that doesn’t seem to be the case.

"It doesn't appear to be that type of a risk with this virus so far, but we are obviously watching that very carefully, so I think there's a lot of really good work being done in schools around the province."

Those over 80 years old are most at risk.

What the World Health Organization has to say

The leading authority on the novel coronavirus outbreak has noted that, for children, the illness causes mild symptoms. That doesn't mean it can't become more serious, but generally speaking, it hasn’t been.

What the numbers tell us

The Chinese Centre for Disease Control published a study which found the overall rate of death for the disease, was 2.3 per cent.

Those numbers are based on an examination of 44,672 cases in Mainland China as of Feb. 11.

When researchers broke that down into different age groups, a clear picture of who is most at risk emerged: 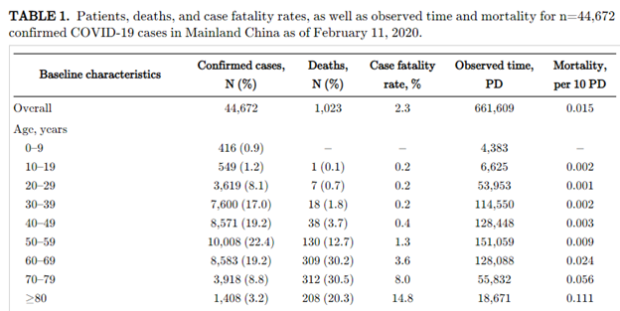 Above chart from the Chinese Centre for Disease Control. Tap the graphic to open a larger version.

The research also found that those with pre-existing conditions like cardiovascular disease, diabetes, cancer, hypertension and chronic respiratory disease were at higher risk.

The province also put out a technical briefing late last week, noting the fatality rate outside of Hubei is 0.9 per cent.

What can be done to stop the spread

Regardless of how severe the illness is, health officials say it's necessary to stop the spread of the disease. Even with mild symptoms, they're asking everyone to be vigilant.

Dr. Henry's office, together with the BC Centre for Disease Control, has put out some information and recommendations to those caring for children.

A letter regarding schools and childcare facilities offers the following advice.

Students/children and adults in the childcare setting should clean their hands:

Also the Public Health Agency of Canada also urges a "no sharing" policy.

What if your kid gets sick at school?

If this happens, schools are advised to contact parents or guardians right away.

The child should be picked up and should not take transit, if possible. If that isn’t possible, they should sit away from others and wear a mask.

The Public Health Agency also recommends cleaning areas of your home that are used frequently such as toys, toilets, phones or other electronics, door handles and bedside tables.

You can use your regular cleaner or diluted bleach (one part bleach to nine parts water).