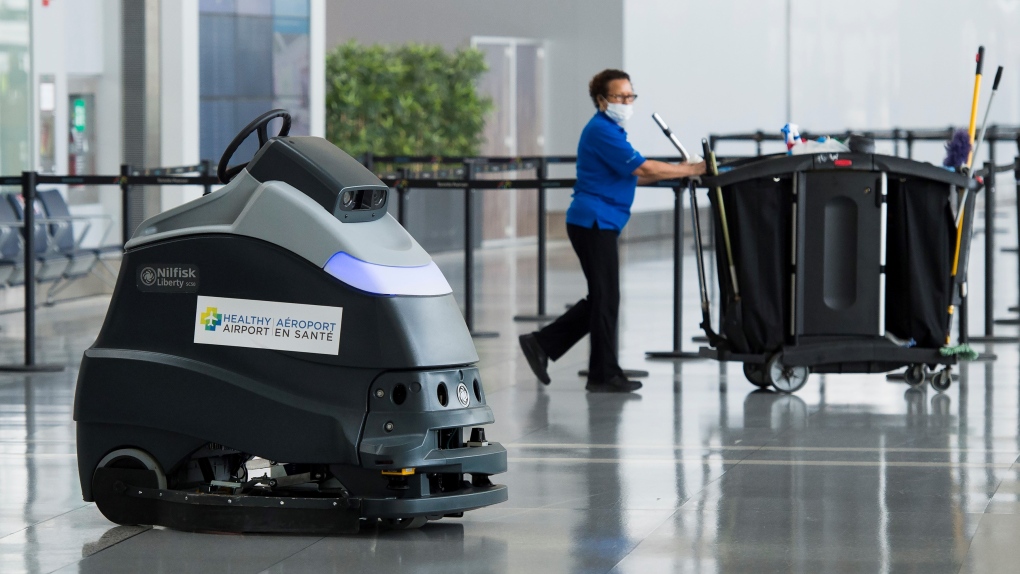 A automated floor cleaner that sanitizes the floor is shown as a worker walks by at Pearson International Airport during the COVID-19 pandemic in Toronto on Tuesday, June 23, 2020. Nathan Denette / THE CANADIAN PRESS)

VANCOUVER -- The union representing hospitality workers across the country says it fears staff laid off because of COVID-19 may not have a job when the pandemic is over.

The challenges facing workers are unprecedented, with more than 90 per cent of employees in hotels, airports, stadiums, universities and schools out of work since March, said Ian Robb, the Canadian director of Unite Here.

"That is why we're putting forward three essentials that Canada's hospitality workers need for a fair and safe recovery in our industry," he told a news conference Thursday.

The union representing 300,000 workers says it wants to protect jobs, ensure it is safe for workers to return to their workplaces, and get income support for those who are laid off.

Too few employers are using the federal wage subsidy program to keep workers tied to their jobs, and all levels of government need to do to more to avoid long-term unemployment in the sector, Robb said.

Analysts predict the $102-billion industry may not fully recover until the summer of 2022, leading to uncertainty for tens of thousands of workers and their families, he said.

"We're calling on various levels of government to be creative and to work with us, Unite Here, Canada, to avert long-term unemployment," Robb said.

The Canadian Emergency Response Benefit is at the centre of the debate as employers recall workers who are concerned about the effects of the pandemic.

Dan Kelly, president of the Canadian Federation of Independent Business, said the benefit has "created a disincentive to return to work for some staff, especially in industries like hospitality."

The Hotel Association of Canada said the industry is eager to get as many workers back on the job as possible, but most hotels are hanging on by a thread with occupancy levels hovering under 30 per cent as a national average.

"The missing link here is access to liquidity. Most hotels do not qualify for the government's loan programs and therefore can't pay the bills during this period," the association said in a statement.

"If you can't pay the bills, you can't survive and there will be no jobs to return to."

The association wants the government to address its emergency response programs to give workers an incentive to return to work.

In the U.S., unemployment benefits of $600 a week are set to expire at the end of July, which will make it will be nearly impossible for workers to support their families, she said.

Hotel worker Christie Spiteri said she's worries the pandemic will be used to replace workers for a lower cost.

She echoed Robb, saying too many employers in the hospitality sector are not using the federal wage subsidy program to keep workers on the payroll.

"I went from having a really good job with benefits and pension to not knowing what my future holds, and obviously that's really scary for me."

- With files from Anita Balakrishnan

This report by the Canadian Press was first published July 16, 2020.

From affordability to vaccinations, here are the priorities outlined in the 2021 B.C. throne speech