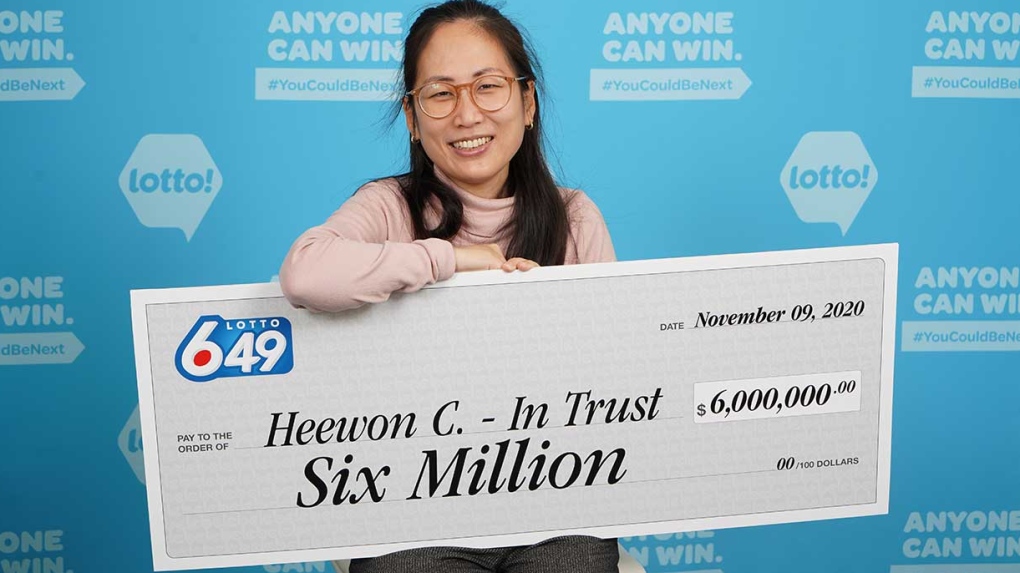 Heewon (Theresa) Choi holds up a giant cheque for $6 million after winning the lottery.

VANCOUVER -- A group of coworkers at a Metro Vancouver hospital said they first thought it was a joke when they heard they'd won $6 million.

Four workers at Royal Columbian Hospital in New Westminster have been buying lottery tickets together for about a year, a news release from the B.C. Lottery Corporation Monday said.

"Team captain" Heewon (Theresa) Choi bought the ticket at a Shoppers Drug Mart, and was in her office when she checked if it was a winner.

"I couldn't believe it," she told BCLC. "I immediately showed it to Melanie (Nolan) who sits right next to me."

The pair told the other two group members when they got into work.

"They thought it was a joke!" Choi said.

The group then told family members, some of whom also didn't believe the news at first.

"I've always dreamed about being a millionaire. I feel like I'm in a dream," Choi said.

As for what they'll do with their winnings from the Oct. 31 Lotto 6/49 draw, the group said they'll be going to a nice meal together.

Nolan said she plans to donate some of her winnings to the Royal Columbian Hospital Foundation, and that she may go back to school.

Their winning ticket was bought just days after a draw resulted in another winner in B.C.

And in late October, a woman who'd bought a Set for Life Scratch and Win ticket during a quick trip to a store in Richmond for cat food and toilet paper ended up winning $675,000.

Several British Columbians also won cash in the summer, including a "frugal" lawn bowler who wanted to buy new kitchen appliances with her prize, and a couple who said they'd be spoiling their cats.