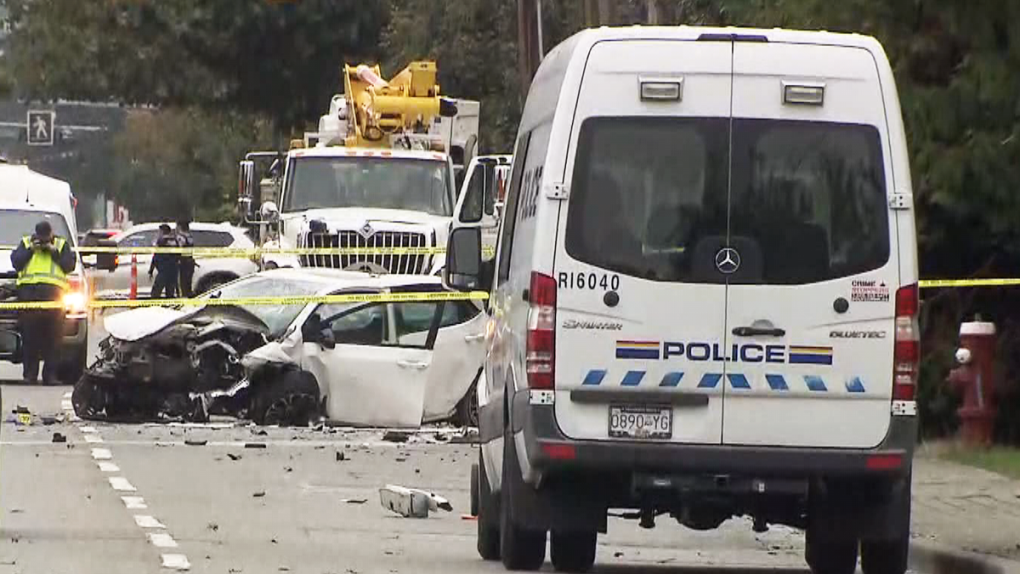 A damaged vehicle is seen at the site of what the RCMP called a "serious" collision in Richmond, B.C. on Monday, Oct. 7, 2019.

VANCOUVER - An Abbotsford man has been charged in connection with a bizarre series of crashes in involving a stolen police cruiser in Richmond that left one woman seriously injured.

A Richmond Hospital patient who wasn't supposed to check out left the facility Monday, and police were called.

But when officers arrived, the patient allegedly stole a police cruiser and took off. As officers tried to catch him, he allegedly crashed into another police vehicle and a civilian vehicle.

The driver of the stolen car allegedly continued and got into a third crash, seriously injuring a woman.

Muhammad Farid, 40, has been charged with one count of dangerous operation of a motor vehicle causing bodily harm and one count of flight from a peace officer.

The woman, who sustained several broken ribs and a fractured ankle, is expected to recover.

B.C.'s police watchdog is investigating the incident. The Independent Investigations Office probes all incidents involving police that result in death or serious injury.

Richmond resident Annabelle Rivera, who lives in the area, said the sound of the crashes was "like a bomb exploded." Another neighbour said officers told people to stay in their houses while they apprehended the suspect.

A spokesperson from Vancouver Coastal Health, the health authority in charge of Richmond Hospital, said they're aware of the situation, but couldn't release any other details to protect the privacy of patients.