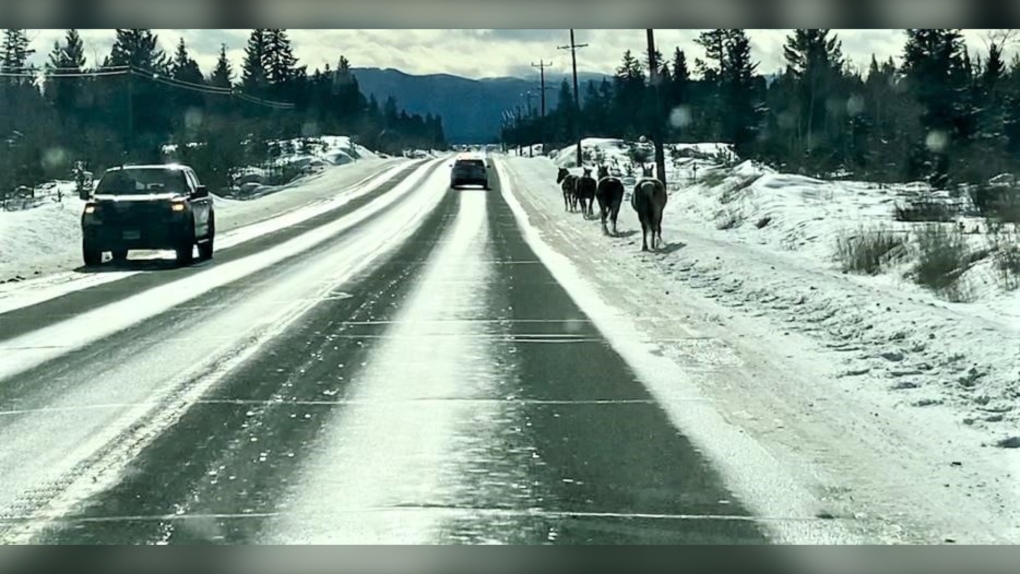 A photo posted on social media by the B.C. Conservation Officer Service shows a line of horses on Highway 97 on Monday

VANCOUVER -- It was a strange call that brought conservation officers to a snowy stretch of highway in Clinton, B.C., on Monday.

They'd overheard that Mounties were trying to round up a group of equine escapees.

"After a day of ice fishing patrols, (conservation officers) didn't expect a call about four horses that had escaped their corral and were on the run along the highway," the B.C. Conservation Officer Service said in a message on social media.

CO Joel Kline overheard the call on his radio earpiece, the BCCOS said. It appeared the horses had gotten free, and were heading north "at a steady trot" on Highway 97 near Chasm Road, an area between Clinton and 70 Mile House.

Kline and a member of the Youth Employment Program had spent most of the day checking on people who were ice fishing in the area when they heard the call, and asked if help was needed.

The horses made it about three kilometres away from home when a convoy of vehicles headed their way. The operation included Mounties, the horses' owner and COs in four trucks and an RCMP cruiser.

They managed to get the horses to turn around, and used the vehicles to herd them back home.

The RCMP cruiser led the way with lights flashing to slow or stop passing traffic, the BCCOS said.

The conservation officers brought up the rear, also with lights on in their vehicle to slow traffic coming from behind.

"We eventually reached the Chasm Road turnoff and somehow convinced the horses to turn into the side road without incident. I hope the horses knew they were almost home safe," Kline said in a Facebook post from BCCOS.

Once off the highway, the COs helped wrangle the horses back into their corrals, with help from someone who showed up with a bucket of oats.

"I never know what each day on the job with the COS will bring, but this was a particularly exciting afternoon," Kline said.

"Only in the Cariboo."