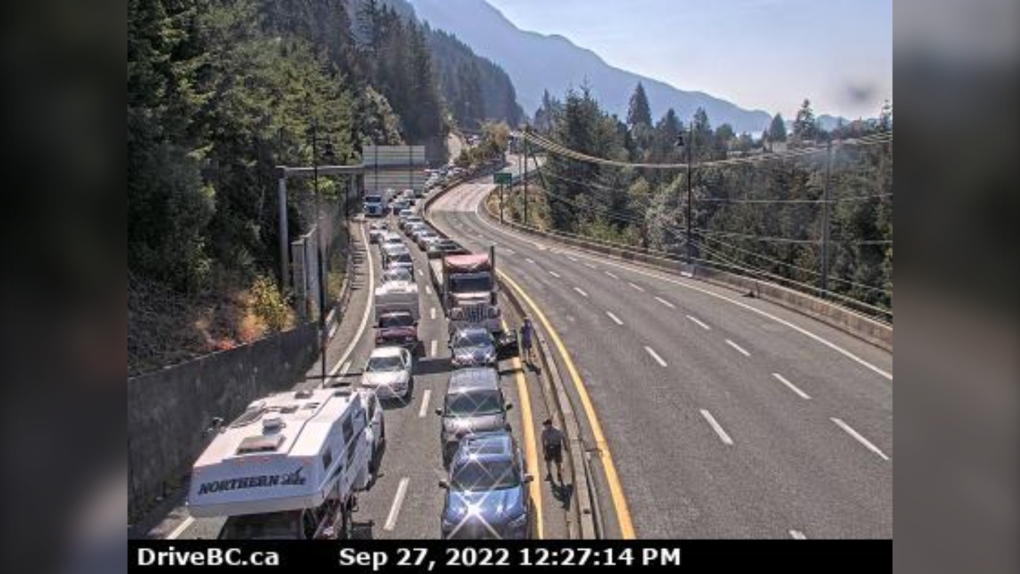 Vehicles are seen lined up on the Sea to Sky Highway in Lions Bay in an image from B.C. Highway Cams. (Ministry of Transportation)

Authorities are trying to locate a damaged white Honda following a "major vehicle incident" that closed the northbound lanes of the Sea to Sky Highway on Tuesday.

Mounties asked the public to keep an eye out for the Honda, which has rear-end damage and is missing part of its rear bumper.

"If seen, please call police and do not approach," Squamish RCMP said on Twitter.

Authorities have released few details about what happened, but said the incident was reported around 11:30 a.m. in Lions Bay, a small community located between Vancouver and Squamish.

B.C. Highway Cams captured a massive lineup of vehicles on the Sea to Sky Highway in the aftermath, with some drivers standing on the road.

The RCMP's Integrated Collision Analysis and Reconstruction Service has been dispatched to the scene, located between Lions Bay Avenue and Brunswick Beach Road.

Hours after the crash, northbound traffic started moving again when vehicles were diverted into one of the southbound lanes.

Squamish RCMP said the barriers were being reinstalled and that the highway was fully reopening at around 7:30 p.m.

BOLO UPDATE: BE ON THE LOOKOUT FOR a white Honda with rear end damage and missing a part of its rear bumper. If seen, please call Police and do not approach. Thank you for your assistance.

Hockey Canada says there were more than 900 documented or alleged incidents of on-ice discrimination across all levels and age groups during the 2021-22 season.

The unemployment rate in Canada declined slightly to 5.1 per cent in November, according to new data released by Statistics Canada Friday.