Homelessness in Vancouver: Council considers plan for encampment amid calls for its closure 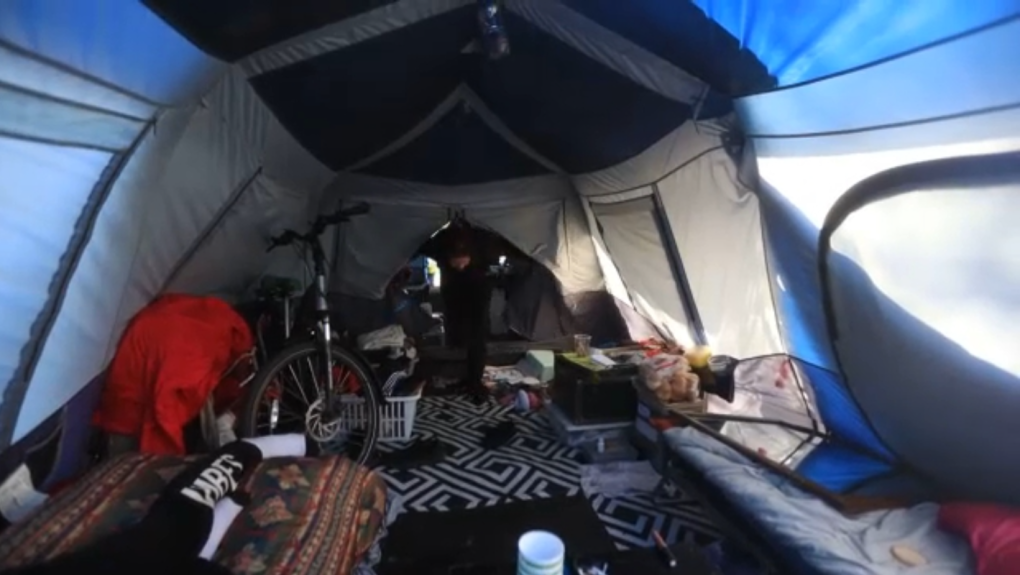 Angela Peterkin sleeps inside a tent with one other person. Tarps pinned to the top of other nearby tents form a covered, communal space to have meals.

VANCOUVER -- Residents of a Vancouver neighbourhood were comfortable with a few people sleeping overnight in a park before moving on, but Kelsey Mulyk says they weren't prepared for homeless campers to continue occupying 400 tents for more than three months.

Mulyk watched as about 50 tents showed up at Strathcona Park across from her home in June before more people arrived, spreading large tarps over their shelters and closing off a play area for children.

“It's quite sad and disheartening, quite honestly, to see what's happening in the city,” she said.

City council is scheduled to meet Thursday to consider Mayor Kennedy Stewart's plan to find housing for the homeless.

The campers moved into Strathcona Park after the Vancouver Port Authority won a court injunction requiring them to leave nearby CRAB park. That was after a previous encampment at Oppenheimer Park was shut down by the B.C. government in April after nearly two years over fears of COVID-19 spreading.

“There are a lot of people who need a lot of supports that are not in place,” said Mulyk, who has daughters aged two and six.

“It's a really tricky balance as a parent. I want to teach empathy and have them understand that so many people end up in circumstances that they didn't choose. I want my kids to understand that, and to be kind and to help when they can.”

Katie Lewis, vice-president of the Strathcona Residents' Association, said people in the neighbourhood want the city to shut down the encampment for safety reasons. The health of those who are living at the park is also at risk, Lewis said.

“When it rains, it gets really muddy and it's basically like a bog,” she said. “There are very few handwashing facilities. There are two showers, I think, for the whole camp, and there are very few toilets. So it's not only a public safety issue here, this is a real public health crisis as well.”

The Vancouver Police Department says officers responded to three times more calls in the Strathcona Park area between June and the third week of September than they did for the same period a year earlier.

A special city council meeting on Thursday will consider a motion from Stewart to earmark $30 million to have the city buy or lease hotels or vacant commercial buildings to house the homeless. He is also seeking provincial and federal funding for his plan.

“I'm asking them to approve both the strategic direction as well as the allocation of money,” Stewart said in an interview on Wednesday.

Stewart said he came up with the recommendations in consultation with experts including the chief medical health officer after councillors proposed seven options to city staff last month. Those included housing the city's estimated 750 homeless people in RV parks, tiny homes and in tents on the lawn of city hall.

He said leasing buildings could provide housing within weeks, similar to what happened when the encampment at Oppenheimer Park was closed by the province.

“What isn't an option is delay. If we go into the council meeting (Thursday) and councillors don't make a decision, that's really the big problem. So what we need is a yes to this proposal,” he said, adding he would then approach the federal and provincial governments for funding.

Coun. Pete Fry of the Green party and Rebecca Bligh, an independent councillor, are calling for “disaster relief shelters” to immediately address homelessness and safety issues because the purchase of buildings in Stewart's plan would take too long.

“We have three concurrent emergencies,” said Fry, who has lived in Strathcona for 30 years.

“We have the overdose crisis, we have COVID-19. Obviously, we have a homeless emergency and together that really amounts to a disaster. And when we frame it as a disaster, that is code for us saying, 'Senior governments, we need your help on this.”'

He said “predatory and criminal elements” are exploiting vulnerable homeless people at the encampment where neither police nor outreach workers are welcome.

“It's taken a neighbourhood that's been incredibly tolerant of a lot of the sort of hardcore inner-city issues that people associate with the Downtown Eastside. And it's really challenged the community, who have been so tolerant of this, by really ratcheting it up to the next level.”

This report by The Canadian Press was first published Oct. 7, 2020.