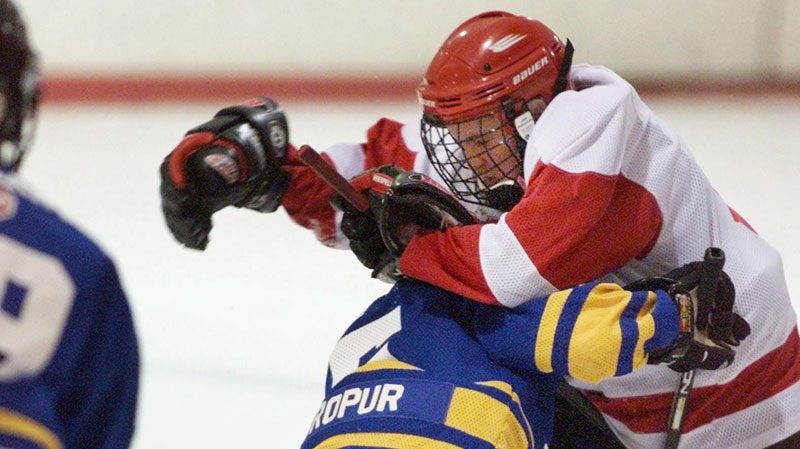 A player from the Dartmouth Whalers collides with a member of the Cole Harbour Red Wings, in peewee "A" action in Halifax. (Andrew Vaughan / THE CANADIAN PRESS)

Most Canadian parents and hockey fans support raising the age of bodychecking in an effort to dramatically reduce the number of serious head and spinal injuries to kids who play the game, according to a new survey.

Figures released Monday on behalf of the Rick Hansen Institute found that 80 per cent of Canadians consider hockey a great activity for kids, but that 87 per cent feel that the sport carries a “significant risk” of brain, head and neck injuries.

That comes in higher than football, at 82 per cent, skiing or snowboarding, at 74 per cent, or soccer, at 28 per cent.

The survey, which interviewed 2,017 adults, is the first of its kind to receive feedback from parents who have kids playing hockey and fans of the game about their feelings about safety-related changes to minor hockey.

There is now compelling evidence that children are at higher risk for head and neck injuries such as spinal cord injuries and concussions when bodychecking is allowed.

The practice is allowed in some jurisdictions as early as 11-years-old and an estimated 15 per cent of all injuries to 9-to-16-year-old players were attributed to a concussion.

Of those surveyed, 88 per cent – including 75 per cent of hockey parents and 86 per cent who consider themselves hockey fans – would support a national policy that eliminated bodychecking in hockey at the peewee level, meaning kids aged 11 and 12.

A slightly smaller number, 82 per cent, would support a ban at the bantam level, where kids are 13 and 14.

Bill Barrable, CEO of the Rick Hansen Institute, says the numbers indicate not only a love for Canada’s national game, but a desire to see the game become safer.

“They want national standards for body checking and age tiering. They want their kids to remain physically active, continue to play the game as adults and keep Canada’s game alive and well for generations to come,” he told CTV News.

Barrable said the institute commissioned the study to help stimulate a fact-based, publicly supported discussion around the need for reviewing hockey practices for Canadian children.

“Spinal cord and traumatic brain injuries never completely heal; the damage is permanent with long term consequences to the individual and society. These and other injuries are a very significant public health and youth safety issue in this country,” Barrable said.

Body checking is responsible for between half to three quarters of all hockey-related injuries, he added. With as many as 550,000 Canadian youth playing amateur hockey in Canada the number is significant: an estimated 30,000 concussions or related head injuries are reported annually for hockey players between the ages of 12 to 19.

A whopping 67 per cent of hockey parents surveyed said they know someone who has suffered a concussion or serious head, back or neck injury while playing hockey, as opposed to 32 per cent aware of such an injury from football, 16 per cent from soccer and nine per cent from mixed martial arts.

Hockey Canada does not have any rules about the ages children are allowed to start bodychecking, instead leaving it up to individual leagues to decide for themselves.

However, the Canadian Pediatric Society and several other sports groups recommend that bodychecking be delayed in all hockey leagues until players are 15-years-old.

The highest level for support came from British Columbians surveyed, at 86 per cent.

The Rick Hansen Institute plans to share the results with hockey associations across Canada as well as federal and provincial health and sports ministers.

“We all need to come together to find ways to make the game of hockey safer among those vulnerable to serious injury, Canadian youth,” he said.

Have your say: Should the bodychecking age be mandated?