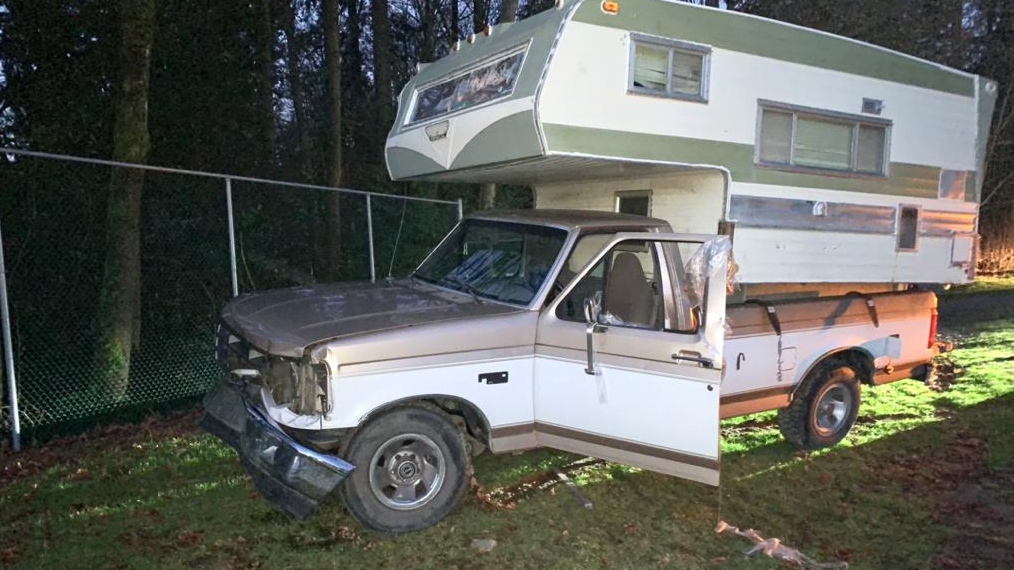 North Vancouver Mounties are searching for a suspect after witnesses say he damaged property, vehicles and allegedly hit someone with a metal bar before driving away. The truck can be seen in this handout photo provided by North Vancouver RCMP.

VANCOUVER -- North Vancouver Mounties are searching for a suspect after witnesses say he damaged property, vehicles and allegedly hit someone with a metal bar before driving away.

Police say they're looking for the driver of an older model pick-up truck with a camper that was found abandoned in a park Monday.

The suspect is connected to multiple incidents causing damage to several vehicles and properties.

Mounties say a North Vancouver resident who lives on West 24th Street near Larson Road was woken up just after 4 a.m. Monday by the sounds of a truck being driven on his lawn.

When the homeowner went outside to confront the driver, they said the suspect struck him in the arm with a metal bar and drove off.

Mounties responded to the scene where they began their search for the brown-and-white truck, which was linked to various offences.

Officials say they believe the same vehicle caused collisions with a taxi, parked car and another motorist shortly afterwards in the area of Lonsdale Avenue and 29th Street.

At 5:30 a.m. police were able to track down the truck in the field of Wagg Creek Park. The suspect had already fled the scene.

In a news release, RCMP say reports are still coming in of damage caused by this truck.

They're asking anyone who might have seen it or noticed damage to their property that may be related, to come forward.