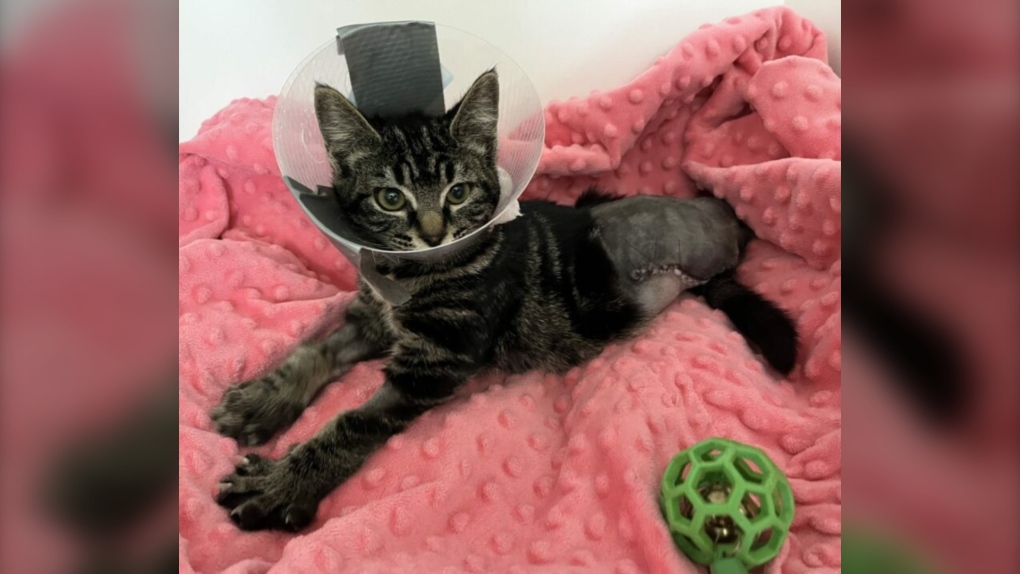 Macy was found on the side of the highway near Williams Lake, the B.C. SPCA says.

A kitten found on the side of a B.C. highway with a broken femur was likely hit by car, the provincial SPCA says.

The SPCA says the kitten, named Macy, was spotted near Williams Lake.

"The Good Samaritan was driving home when she noticed a 'lump' on the white line on the edge of the road," said Liz Dighton, manager of the Williams Lake and District branch, in a news release.

"She wasn't sure what it was but when she turned around to check she found the helpless kitten. She wrapped her up in a towel, placed her on the passenger seat and reached out to her daughter to help her find the closest veterinary clinic."

The vet discovered Macy had a broken femur, most likely from being hit by a car.

"The break was so severe amputation was the only option," Dighton said. "She also had internal parasites but was in overall good health."

Macy's had her surgery and is now recovering. She'll be placed in a foster home while she heals and won't be available for adoption until she's undergone weeks of other care. Once she's recovered, she'll be spayed.

Dighton said Macy might hiss when she meets someone new but "quickly relaxes," becoming a "friendly, sweet girl."

"Back scratches and chin rubs turn her into a purr machine," Dighton said. "She just loves it when people spend time with her."