Health official 'disappointed' by crowding at protests advises smaller gatherings, other ways of speaking out during pandemic 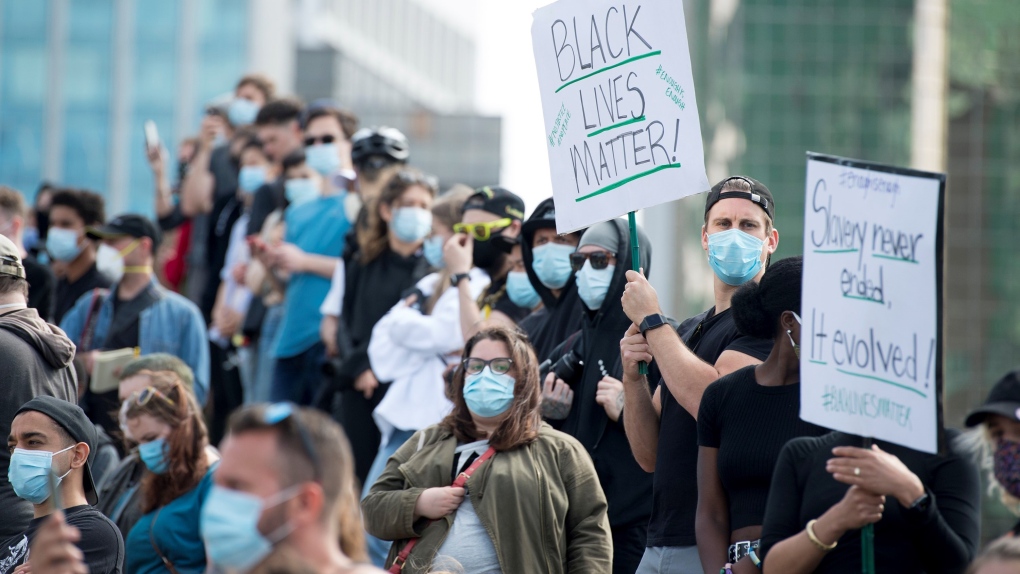 Thousands of people gather for a peaceful protest in Vancouver, Friday, June 5, 2020 in solidarity with the George Floyd protests across the United States. (Jonathan Hayward / THE CANADIAN PRESS)

VANCOUVER -- After advising anyone involved in anti-racism rallies to self-monitor for COVID-19 symptoms, a B.C. health official offered more suggestions for demonstrators.

Dr. Bonnie Henry, B.C.'s provincial health officer, was asked to weigh in on recent protests during a news conference on new COVID-19 cases.

She'd just announced there were no virus-linked deaths in the province for the fourth straight day, though there were nine new cases identified through testing.

Speaking about the protests, which drew crowds in Vancouver and around the world, she said public health guidelines meant to stop the spread of the pandemic still apply.

"I am disappointed because I know there are very effective ways for small groups of people to demonstrate these important issues and do it peacefully, and to do it safely," Henry said Tuesday afternoon from Victoria.

"And I encourage people to find those ways. There's lots of examples of them around the world and here at home."

Her advice for those hoping to make a difference through demonstration is to do so in a way that doesn't involve crowded spaces.

"So, smaller groups, keeping a distance from each other… These are the things that we need to do to protect our communities," she said.

Henry said she'd been speaking with colleagues in some U.S. states, who've expressed concerns about the protests in their areas.

"Particularly when there's attempts to shut them down, and there's use of things like tear gas to disperse crowds. You know, those are things that can provide an environment that would allow this virus to transmit, and we are starting to see increases in some states that are very worrisome," she said.

The doctor says so far there hasn't been anything like that in B.C. or the rest of Canada.

"But we are watching carefully, and I will say again, find small, impactful ways where you can stay separate from each other, where you can have your voice heard in a way that's safe, particularly for those people who are more likely to be disadvantaged by this pandemic."

Henry said previously anyone who's been to one of the protests should self-monitor for two weeks.

Speaking after a rally outside the Vancouver Art Gallery, Henry said at the time that gathering in crowds of that size poses a high risk of infection, even when outside.

"Those who were there (May 30), you may have put yourself at risk and you may bring that back home, so you need to monitor yourself carefully," Henry said June 1.

"If you have any symptoms at all, you need to self-isolate, you need to get tested, you need to be sure that you're not contributing to further transmission of this virus."

With files from CTVNewsVancouver.ca's Andrew Weichel