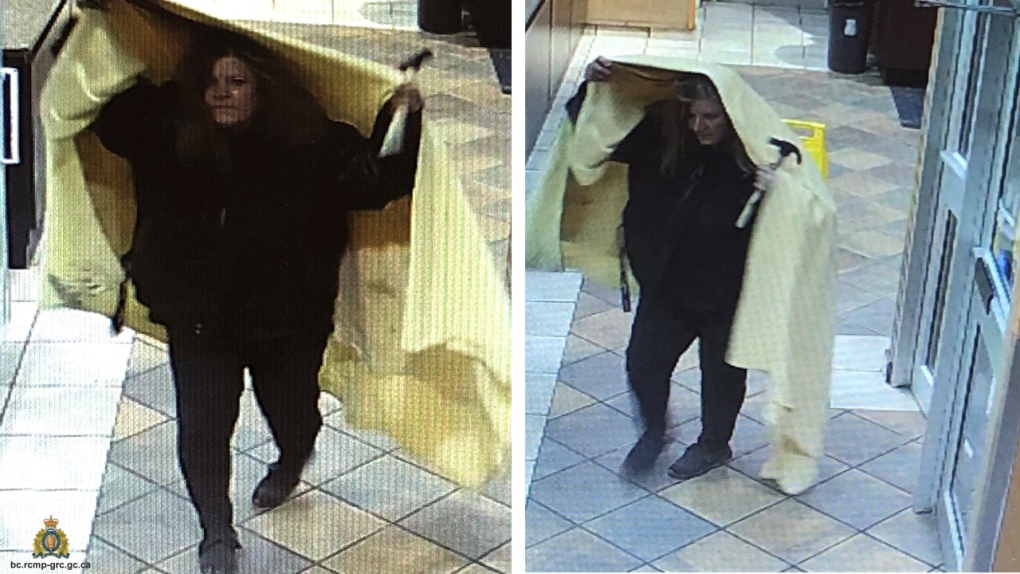 Police released surveillance photos of the suspect, who can be seen wielding the hammer and holding a yellow sheet over her head. (Columbia Valley RCMP)

VANCOUVER -- Police in British Columbia's Interior say they have arrested a woman suspected of brandishing a hammer for the purpose of robbing a Dairy Queen earlier this week.

The incident happened on Wednesday in Invermere. Columbia Valley RCMP said they were called to the restaurant shortly after 8 p.m. for reports of a robbery that had just been committed.

Officers soon determined that a "lone female suspect" had entered the restaurant "brandishing a hammer, while demanding cash," police said. They released surveillance photos of the suspect, who can be seen wielding the hammer and holding a yellow sheet over her head.

Police said the woman was able to leave the restaurant with "an undisclosed amount of currency" and flee the area in a small car.

On Friday, police said they had identified and arrested a 58-year-old Kimberley woman, who is now facing "a number of potential charges as a result of the incident." She has been released on strict conditions and is scheduled to appear in court "at a later date," police said.

No one was injured during the robbery, and the woman was arrested without incident on Friday, Columbia Valley RCMP said. They thanked Kimberley RCMP and the public for their help with the investigation.