Halloween and Christmas creep – are retailers jumping the gun?

It was a beautiful summer day. The sun was shining and people were walking around in shorts. But that didn't matter to the folks at Costco; it was time to deck the halls with Christmas merchandise.

Some consumers CTV News Vancouver spoke with thought that was a bit much. It was only mid-August. But just days before that, Costco had Halloween stock on shelves, candy and costumes. Nesters had its Coffin Crisps out and Rexall was ready to cash in on the trick-or-treat season too.

"Already?" said Athena, a shopper who stopped to weigh in on it. "We know the holidays are coming, maybe a month in advance, maximum."

To get a better perspective on we talked to Greg Wilson with the Retail Council of Canada.

"I don't think it's ever too early. The retail industry is very competitive and individual retailers are always looking to gain an advantage on their competitors," Wilson explained.

Wilson says retailers bank on the holidays and it's usually not until after Black Friday or Cyber Monday when they start to make their profits for the year.

But they also try to cash in on other holidays too.

According to research done by the National Retail Federation, here's how it breaks down by spending per person:

So who's driving the holiday spending – shoppers or retailers? Wilson says it's a bit of both.

"Some consumers like to stock up in advance and retailers are just meeting a demand," he said.

It's not unusual for shoppers to want to get their holiday shopping done early in order to avoid the crowds. Some try to grab deals after the main holiday event but stocking up on sales after the holiday passes.

Hopefully, it's not last year's candy they're handing out this Halloween. Regardless, some consumers say leave the holidays alone.

"I just feel like maybe that everything's rushed. Let us just, you know, enjoy now and stop rushing the years," said one woman we talked with in the heart of Vancouver's downtown retail district. 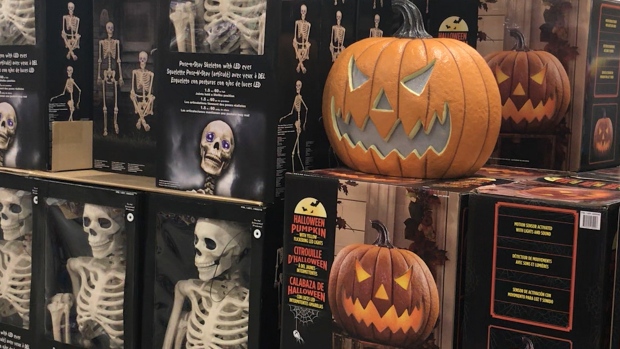