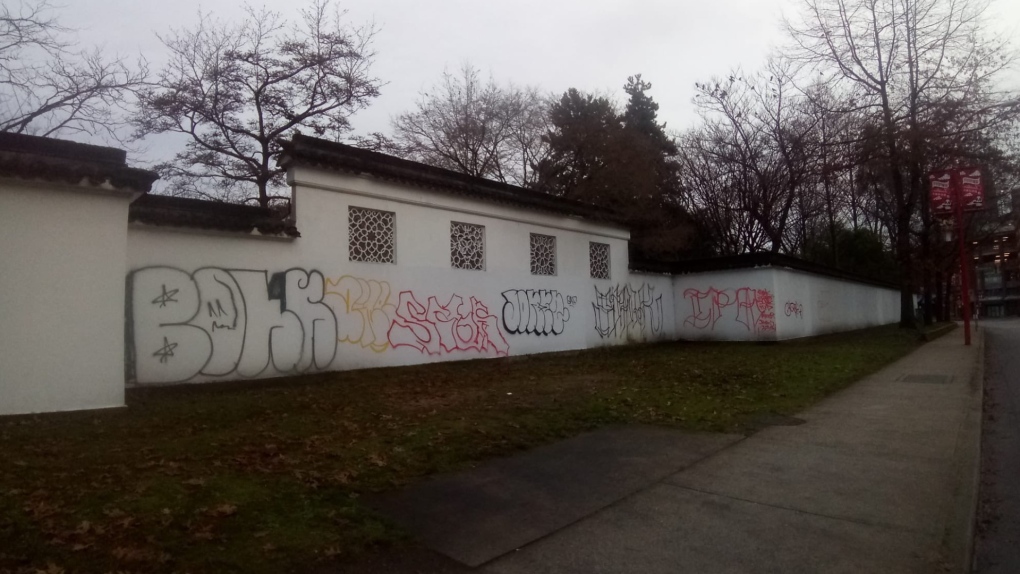 The gardens, located in the city’s historic Chinatown, are a cultural hub for Metro Vancouver’s Chinese-Canadian community.

Executive director Lorraine Lowe says staff alerted her to the many large, spray-painted tags on the garden’s white outer walls, around 9 a.m. on Sunday.

Other recent incidents of graffiti vandalism on the institution have been racially targeted, but Lowe says it appears this time it’s just the large tags.

As a well-known attraction, the society is also an economic driver for the area, attracting visitors who then shop and eat nearby as part of their visit.

“It's not just an attack on our nation, but an attack on all the communities and groups we serve, the marginalized communities, we serve the LGBT community, the Pride in Chinatown (group), and the Chinese Canadian Indigenous art exhibition engagement that we just had,” Lowe said.

“I feel that it's important for us to be recognized as a safe and inclusive space for everyone to share…(so) this type of vandalism and attack on our institution is quite concerning and disheartening.”

“I just hope that on a world stage we're not viewed as this place as being dangerous, rather, we are an oasis in the whole heart of the city and…inside (the garden walls) it's beautiful,” Lowe said.

The economic recession and COVID-19 pandemic have hit the garden hard, and vandalism is the opposite of what the garden – and community – need, Lowe said.

“We've been down for quite some time and you know, this is just another thing…(and it has happened) so close to Chinese New Year. We want to make sure that we have a very successful Chinese New Year,” she said.

Lowe said that garbage, human urine and feces are frequently found surrounding the garden and at the main gates.

“When our staff arrives at 9 a.m. in the morning, and we have to open our doors at 10 a.m., the waft of smell and the urine – it's just, I don't know if it's targeted, it's starting to feel like it is over a course of repeated incidences.”

“There's other places to defecate – whatever – but it just seems to happen all the time where our entrance gate is right on Carrall Street.”

Garden staff reported the incident to police on Sunday morning, and by the early afternoon cleanup and a paint-over had begun, Lowe said.