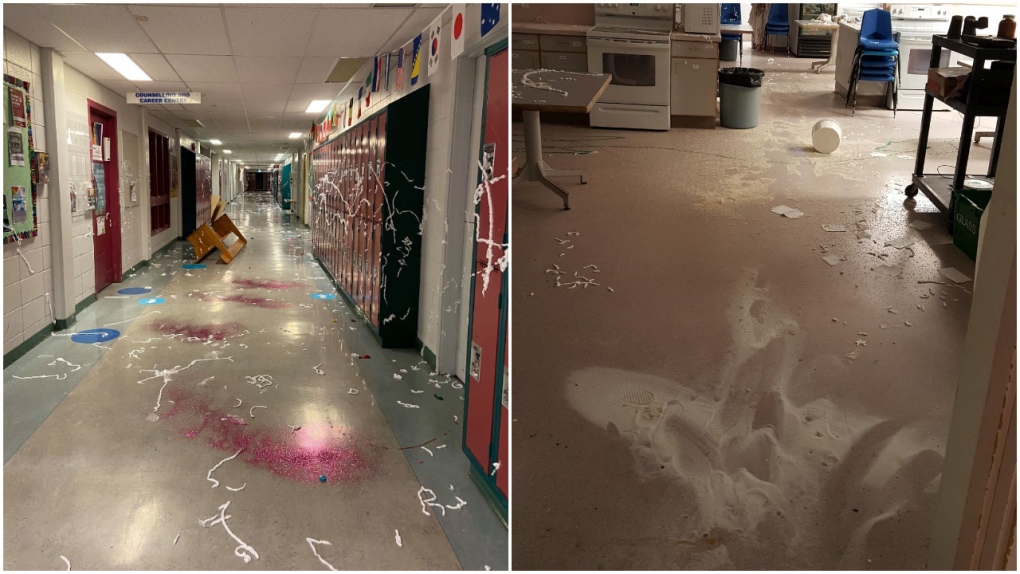 Photos provided by the Nelson Police Department show the aftermath of what officers call a graduation prank taken too far at a high school in Nelson, B.C.

VANCOUVER -- An apparent pre-graduation prank went a bit too far last weekend, according to police in Nelson, B.C.

Four teenagers were arrested and may be charged following what officers described in a news release as "criminal break and enter."

According to the Nelson Police Department, a few students broke into and vandalized L.V. Rogers Secondary School in the city in B.C.'s southern Interior.

Saying the teenagers' prank "got out of hand," police wrote that they'd been called to the school and found vandalism to "numerous floors, including classrooms and the staff lounge."

The principal was called to the school and decided the damage was enough that the building had to be closed until it could be cleaned.

Staff members came to help, and parents volunteered their time. The job took between 35 and 45 people a full day to finish, according to officials in Nelson.

Students were not part of the clean-up effort due to "health and safety concerns," police said.

The department says its officers worked with staff and "co-operative students" to identify suspects in what officers have called a case of criminal break-and-enter and mischief over $5,000.

With information gleaned from about 20 interviews, four students were identified and arrested.

They've since been released, and may face charges.

Police said most of the students involved agreed to take part in a restorative justice program, and a resolution is being worked out.

"Together, (LVR staff, parents, the director of the restorative justice program and volunteers) will work with the students toward achieving a responsible solution to the problem created by this harmful behaviour," Staff-Sgt. Brian Weber said.