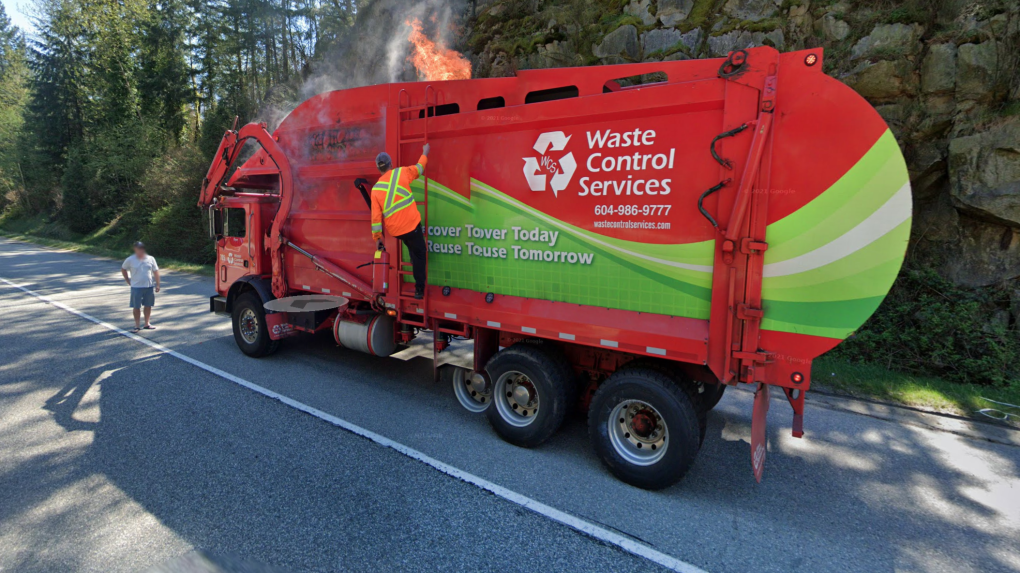 The images captured heavy smoke and flames billowing out of a garbage truck on the side of the road (Google Street View).
VANCOUVER -

While Google Street View is a handy tool that allows users to virtually explore streets and landmarks, it can also capture some pretty unusual sights.

That's what happened earlier this year when a Google Street View car was travelling eastbound on Hwy 99/1 near Almondel Crescent in West Vancouver.

The images captured heavy smoke and flames billowing out of a garbage truck on the side of the road.

Jeremy Crawford, the general manager of Waste Control Services Inc., tells CTV News Vancouver that the fire broke out on one of their trucks on April 20 and an employee was able to extinguish the flames.

That employee can be seen on the Google Street View images climbing up to the top of the truck with a fire extinguisher in hand.

While Crawford says he doesn't know the exact cause of the fire, he doesn't believe it was mechanical.

"It's just speculation at this point but it could have been from something in a container that he just serviced that might have been smouldering at the time like a cigarette butt," he says. "The wind from travelling at highway speeds could have stoked the fire."

The images also captured another motorist who pulled over and approached the employee to offer help.

Crawford says fortunately, there was no serious damage.

"There were a few hydraulic lines that were replaced as a result, but the majority of the damage was just cosmetic…so new decals."