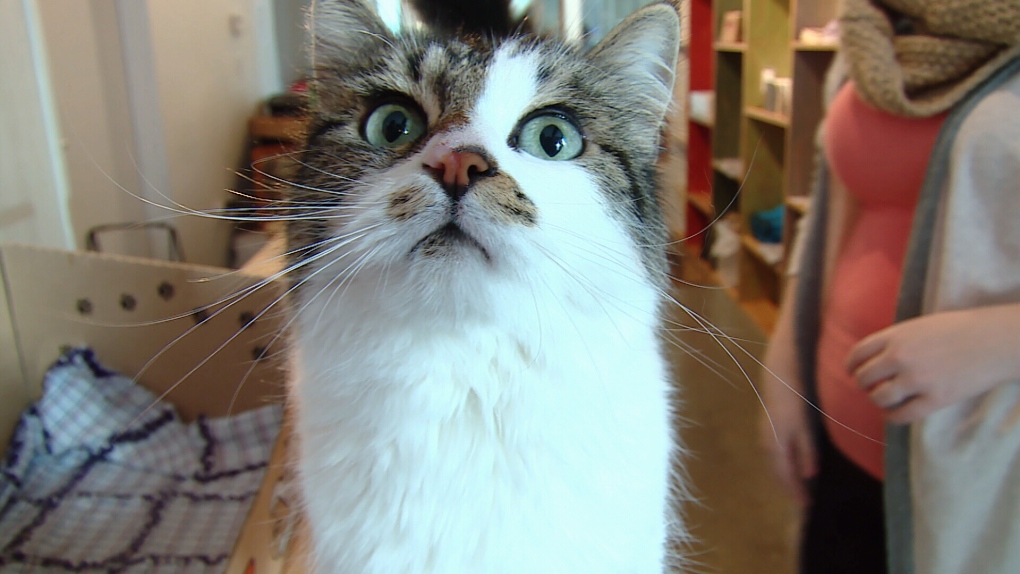 Vancouver’s new cat café reopened Jan.8, 2015 after being forced to shut its doors earlier in the week due to a shortage of cats. (CTV News).

Vancouver’s new and very popular cat café re-opened Friday after being forced to shut its doors earlier in the week due to a shortage of cats.

The Catfé, which operates out of the International Village Mall downtown, said it was forced to close on Monday after an overwhelming amount of adoptions in its first three weeks of operation led to “catlessness.”

Owner Michelle Furbacher told CTV News on Friday that the Catfé had nine new cats, and was “back in business.”

“It feels pretty good, because at the end of the day when we have more cats here the cats are happier too,” Furbacher said.

“When we only have one or two, everyone is vying for their attention and it’s just too stressful for the cats, so it’s really good...to have more cats in the space.”

A feline named Leo had been in the Catfé for just one hour when Furbacher received an application for his adoption.

“Leo is beautiful...he looks like a wild cat,” she said, smiling. “He’s just twirling around on the floor right now.”

The café, which encourages patrons to enjoy a café au lait with their “meow mix,” lets feline-lovers mingle with adoptable cats in a social and safe setting. Admission costs between $5 and $8, depending on if you purchase something from the café.

The cats are provided by the local BC SPCA, which only sends animals it feels would be comfortable with the attention. But while the cafe and animal welfare agency aim to have between eight to 12 cats there at any time, it found itself with a shortage because of steady adoptions.