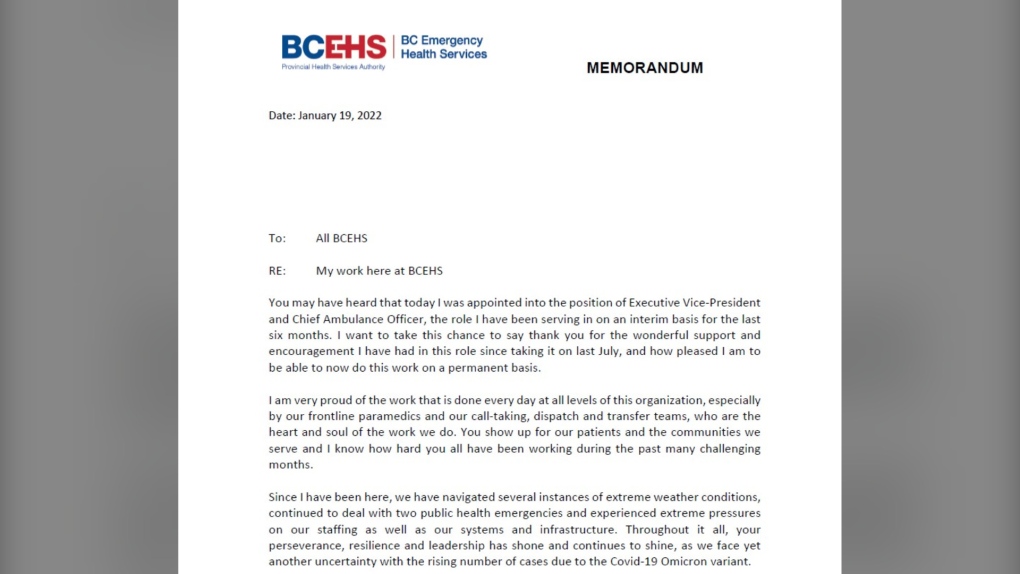 An internal memo to staff was obtained by CTV News.

Six months after the fatal heat dome that claimed hundreds of British Columbians' lives amid an unexplained lack of preparedness from the province’s emergency health officials, and as long waits for 911 and ambulance service continue to be a problem, the executives at the helm have been replaced on a permanent basis.

In an internal memo to B.C. Emergency Health Services staff obtained by CTV News, Leanne Heppell, who’d been appointed executive vice-president and chief ambulance officer on an interim basis in July, was announced as the permanent holder of the role.

“Since I have been here, we have navigated several instances of extreme weather conditions, continued to deal with two public health emergencies and experienced extreme pressures on our staffing as well as our systems and infrastructure,” she wrote to staff, thanking senior leaders and front-line staff for their work and support.

Dr. Wilson Wan, who’d been serving as interim chief medical officer for BCEHS since at least February of 2021, has also been replaced. Dr. Mike Christian is described as joining the service last month and “was also recently one of the first three physicians in Canada to receive the Diplomate (DRCPSC) in Prehospital and Transport Medicine from the Royal College of Physicians and Surgeons of Canada.”

Heppell’s permanent promotion and Christian’s appointment were not announced via news release from BCEHS. Instead, the information was updated on the organization’s website by the time the memo went out to staff on Wednesday morning.

Heppell’s appointment came as the ambulance service came under increased scrutiny for its belated response to record-high temperatures throughout the province. By November, the top two non-clinical executives had been quietly reassigned to other roles in the health-care system.

In her first interview since taking the helm on an interim basis, CTV News asked if there had been any management changes since the heat dome and Heppell had replied she was unaware, but an internal memo revealed an interim chief operating officer had been doing the job while Darlene Mackinnon had been on leave. At the time, a petition was circulating to remove her from the post.

Heppell described this as the most “transformative era” in BCEHS history, and the chair of the newly-formed board overseeing the organization lauded her qualifications and enthusiasm for the job.

“In accepting this appointment, Leanne confirmed with me that her focus now is on continuing to work collaboratively with the BCEHS Board, PHSA, Ministry of Health and Ambulance Paramedics of BC (APBC), to take concrete actions that position BCEHS to best meet rapidly changing demands and ensure our provincial ambulance system is delivering high quality, responsive care to British Columbians who need us most.,” said Jim Chu in an email.

His statement, sent from the BCEHS communications team on his behalf, did not answer CTV News’ question about whether her promotion and Christian’s appointment were at the direction of the health minister or the board’s decision, but said Heppell “reports directly to the BCEHS board, through me as board chair.”

OPTIMISTIC OUTLOOK DURING A CHALLENGING TIME

The moves come amid a staffing crisis in the paramedic and dispatch service, which had been struggling before the Omicron wave but has recently seen up to half of available ambulances unstaffed; last year alone the Ambulance Paramedics of B.C. report their members responded to a record-breaking one million dispatches for service.

Heppell described the current situation and the omicron wave as “tough” but struck an optimistic tone in her memo.

“We will get through this latest challenge, and there will come a time when the pandemic becomes an endemic, and we can return to a more normal way of working and living,” she wrote.

“For now, we are very focused on maintaining our staffing levels, but there are many other important projects that we will return to soon, exciting initiatives that will help us achieve our goal of becoming a world-class emergency service and improving the work experience of our staff.”

The Edmonton Oilers defeated their Alberta rival Calgary Flames 5-4 in overtime in Game 5 of their second-round NHL playoff series Thursday night to advance to the Western Conference final.

A 10-year-old boy in a classroom just down the hallway from the room where a gunman killed 19 children and two teachers in Uvalde, Texas on Tuesday said the experience of hiding during the shooting was 'terrifying.'

Monkeypox cases up to 26; first case detected in Ontario: PHAC

Canada's job vacancies are at a record high