The Nooksack River in Washington state has overtopped its dike, and the City of Abbotsford is expecting floodwaters to cross the U.S. border, Mayor Henry Braun said Sunday afternoon.

As of 4 p.m. along Boundary Road, waters were already pouring out of Whatcom County fields and onto the Canadian side of border. By 5:30 p.m., the Nooksack had entered minor flood stage, according to the U.S. National Weather Service, but hadn’t yet peaked.

Hundreds of farms and homes sit within a couple kilometres of the line, including the Dykman Cattle Company, where Cynthia Dykman told CTV News late Sunday there were a lot of frayed nerves.

Her husband, Ted, said he was once again preparing to move their 300 calves to higher ground.

The mayor said the city is expecting flooding on Sunday to be less significant than the floods that inundated the Sumas Prairie last week.

However, the city remains "extremely concerned" about the continued risk of flooding as more rain falls on Sunday and more is forecast for the coming week, Braun said.

"The land is super saturated," he said. "None of that water (from the Nooksack) is going into the ground. That's coming straight over like a surfer on top of the water that's there. It'll come here a lot faster than in the previous event."

Dykman, who has experienced three Nooksack floods in 20 years, said it typically takes about four hours for floodwaters to travel the 10 kilometres from Everton, Wash., to their farm.

She said she’s watching the storm drain at the foot of their driveway for a warning sign the waters are coming up.

Meanwhile, Shawn Hystek, who also lives on the southwestern edge of Sumas Prairie, said he was heartened to see the military out running dump trucks, adding gravel to raise dikes and stacking sandbags in low-lying spots along roads.

And he added that no matter what happens overnight, or how high the water goes, the community will pull through together.

“After the first one that we just went through here, (we saw) how strong the community is and people coming together and people helping each other,” Hystek said.

On Sunday evening, a mudslide prompted evacuation orders and alerts near Sumas Mountain.

Units 12 through 18 at 2842 Whatcom Rd. were ordered to evacuate, and several properties on nearby Sandringham Drive were put on evacuation alert, according to Abbotsford police.

Earlier in the day, heavy rain and snowmelt crossing the border from the U.S. triggered fresh flooding in Abbotsford and prompted a new evacuation order for the city's Huntingdon Village area.

The floodwaters could pose "immediate danger to life safety," warns the order, which affects the area of Huntingdon Village bordered by Sumas Way on the west, A Street and 2nd Avenue on the east, Farmer Road on the North, and the U.S. border on the south.

"You must leave the area immediately," the order reads. "Gather your family and, if you have room, take a neighbour or someone needing transportation. Do not use more vehicles than you have to."

Evacuees have been told to register at the Emergency Support Services reception centre set up at the Abbotsford Recreation Centre on McMillan Road.

The city instructed residents to close their doors and windows, gather critical items such as medicine and keys, and shut off their gas and electrical appliances, except for refrigerators and freezers.

Gates should be latched but left unlocked, officials said.

Authorities were already reporting flooding in the Huntingdon Village by mid-morning. While the Nooksack River in Washington state had yet to overflow its banks at that time, the Abbotsford Police Department said flooding in the U.S. community of Sumas "is flowing north."

The severity of the flooding from the Nooksack remains to be seen, Braun said Sunday, adding that he's confident Abbotsford has done everything it could to prepare for the arrival of more floodwaters.

When the Nooksack floods, some of the floodwaters typically get captured by the Sumas River watershed, which flows north into the Fraser River through the Sumas Prairie, rather than directly to the ocean via the Nooksack's own watershed.

Floodwaters from the Nooksack, along with the failure of a dike along the Sumas, were the primary reason for the flooding on Sumas Prairie after the historic rainstorm that hit B.C. earlier this month.

Drivers have also been urged to use caution if they leave home.

"We have had significant rainfall with more rain forecasted. Water is pooling on several roads," Abbotsford police said on Twitter Sunday morning. "Today would be a great day to stay home and catch up on (the TV series) Yellowstone or some laundry."

About 180 soldiers spent Saturday erecting a sandbag wall approximately 500 metres long next to the railway track in an effort to divert water away from Huntingdon Village.

Asked Sunday whether the city regretted not building a larger barrier of sandbags in hopes of stopping the Nooksack, Braun said that's not the purpose of the sandbagging efforts.

"If we wanted to try to stop the Nooksack, I'm not even sure we could do that," he said. "You'd have to build a dike 18 feet tall. That's what it would take. And all that would happen is the water would flood somebody else out."

Residents were also bracing for floodwaters, picking up sandbags in the hopes of protecting their own property and livestock.

Braun previously noted the atmospheric river that arrived Saturday was forecast to deliver up to 120 millimetres of rain to his community by Sunday morning. 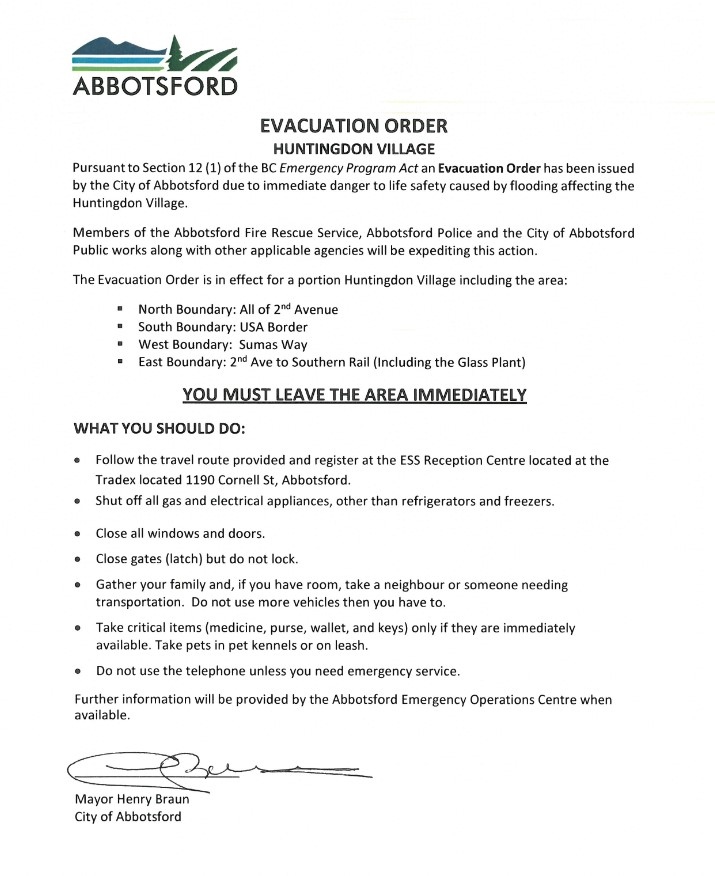