Free to go or closer to extradition? What to expect from Wednesday's Meng Wanzhou decision

VANCOUVER -- May 27 update: The decision will be posted here. Follow along live.

At 11 a.m. Wednesday, a B.C. Supreme Court judge will publish a decision that could have global implications.

And at its core, the judgment poses one critical question: will the extradition of Huawei's Meng Wanzhou proceed, or nearly 18 months after her arrest, will she be free to go?

Meng has been on $10-million bail and living in one of her two multimillion-dollar Vancouver mansions since December 2018.

The chief financial officer of China's tech crown jewel, and the daughter of its founder, is charged with bank and wire fraud in the U.S.

American investigators allege she misrepresented Huawei's relationship with a subsidiary called Skycom during a PowerPoint presentation she gave to HSBC in Hong Kong in 2013, putting the bank at risk of violating U.S. sanctions on Iran.

Meng and Huawei have repeatedly denied the charges, and have argued she is a political pawn caught in the power struggle between Beijing and Washington.

Ahead of the key ruling, a spokesperson for China's Ministry of Foreign Affairs urged Ottawa Tuesday to "correct its mistakes" and free Meng to avoid "further damage."

Wednesday's decision deals with a requirement of extradition called double criminality: in order for Meng to be extradited, her alleged conduct must also be considered a crime in Canada.

This January, Meng's team told Associate Chief Justice Heather Holmes that even if the allegations against Meng were true (for the sake of argument), because Canada did not have sanctions against Iran, HSBC would not have been placed at risk, and thus there would have been no fraud, and no crime.

Crown argued that the "essence" of Meng's alleged conduct was fraud itself, and called the fact that Canada and the U.S. may have different sanctions against Iran a "distraction."

If the judge rules against Meng

If Justice Holmes finds the test of double criminality has been met, Meng's legal team is expected to immediately appeal the decision.

While that process plays out, Meng plans to argue next month that her Charter rights were violated when she was arrested at YVR back in December 2018, part of what's called an Abuse of Process application.

Meng's defence team alleges she was detained and questioned for three hours by Canada Border Services Agency as part of a "covert criminal conspiracy," essentially a fishing expedition by Canadian and American authorities to gather evidence that would bolster their case against her.

Both the RCMP, who arrested Meng, and CBSA have repeatedly denied any wrongdoing.

The Huawei team also plans to argue that the charges against Meng are politically motivated.

Eventually, Justice Holmes would have to rule on Abuse of Process matter, and if Meng lost, her team would likely appeal.

Canada's justice minister would also have to decide if she should be surrendered to American authorities, a decision that Meng is entitled to have reviewed by the Court of Appeal.

Legal experts indicate her case could reach the Supreme Court of Canada and the process could take years. 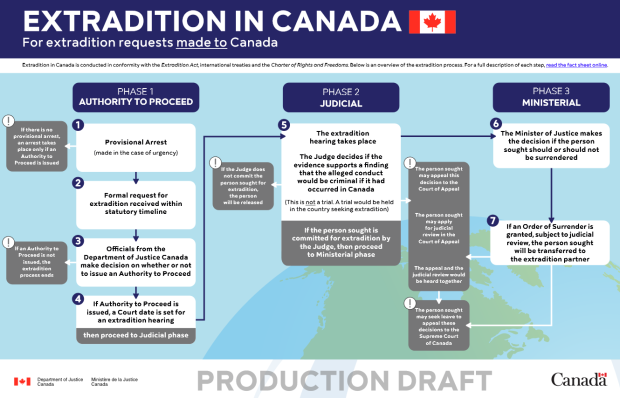 Infographic from the Government of Canada. Tap here for a larger version.

If the judge sides with Meng

In theory, if Justice Holmes decides the double criminality test has not been met, she could dismiss the case and release Meng from her bail requirements, return her passport, and allow her to leave the country.

What remains unclear is whether Canada's Department of Justice plans to appeal such a decision.

"We cannot speculate on the outcome of the double criminality motion," spokesperson Ian McLeod wrote earlier this year.

There is also at least one more impediment standing between Meng and a flight back to China: the Canada Border Services Agency.

Documents submitted to the B.C. Supreme Court during the disclosure process indicate that the CBSA never officially admitted Meng into Canada.

Instead, after three hours of questioning, they suspended her admissibility exam before turning her over to the RCMP for arrest.

"We are unable to provide general information on all the possible scenarios in which an immigration exam may be suspended," wrote CBSA senior spokesperson Rebecca Purdy in February.

Purdy declined to comment on whether CBSA could potentially take Meng back into custody to complete their exam if she were freed.

No matter what Justice Holmes decides regarding double criminality, Meng and lawyers from both sides are expected to be in court either in person or on the phone to discuss their intentions and what happens next.