Someone has been posing online as a recent lottery millionaire from B.C.'s Lower Mainland, promising free money to desperate people from around the world in an apparent ploy to defraud them.

The actual lottery winner, Christine Lauzon of Burnaby, claimed a Lotto Max jackpot of $70 million last October. At the time, she told the B.C. Lottery Corporation she planned to share some of her winnings with family, then speak with a financial advisor before deciding what to do next.

Weeks after her win, a Facebook account under her name, with a profile picture of Lauzon accepting her prize, posted a seemingly generous offer to people in need.

"I have volunteerilly decided to help people financially, to uplift businesses, to help pay medical bills and other depressing attention worth issues (sic)," it reads. "Let me know if you faced difficulty/depressing situations that you wanna share with me and seek help."

CTV News contacted the BCLC, which was able to reach Lauzon and confirm she is not behind the Facebook page.

A number of other fake accounts have also made posts thanking Lauzon, providing testimonials about receiving up to $10,000, no strings attached.

"Thanks to Christine. She just paid the mortgage on my house," one account wrote. "I have been so devastated since my business has been having issues since the COVID, and she just assisted me, without asking anything for her. May God bless her."

Real people who came across the page had different experiences. CTV News has heard from two women who were almost taken in, including someone from Lautoka, Fiji, who was thrilled at the opportunity for help fixing her family home.

"Every time there's heavy rain our house is flooded. The water goes inside half of the house, and we have to try to get out and go up to the church," she said.

The woman, who asked that her name not be published, messaged the fraudulent Christine Lauzon page on Jan. 1, and heard back hours later.

"I was telling her about how my situation is pretty hard, and she told me she was willing to help, but she was only helping through Bitcoin," she said. 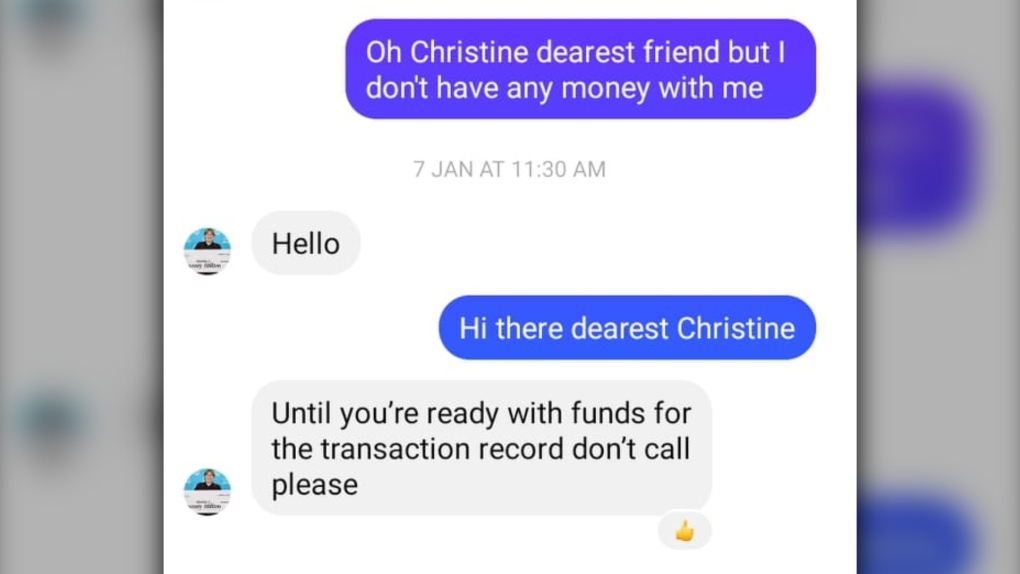 A fraudulent Facebook account posing as a B.C. lottery winner promised to give free money to people in need, but only if they deposited money in a Bitcoin wallet first.

The woman was devastated to learn the account is fake, but told CTV News she's thankful she hasn't lost any money of her own.

Screenshots of her conversation with the scammer show she was pressured into opening a Bitcoin wallet, and told she had to find a way to deposit $300 before she would receive any financial help. She had not been able to gather the money by the time she was contacted by CTV News.

The names of local lottery winners have been used in a number of previous scams, including one that promised up to $1 million in exchange for sensitive personal information from the targets.

The B.C. Lottery Corporation encouraged anyone who suspects criminal activity, such as fraud involving a lottery winner's identity, to contact police.

"BCLC cares about our players and we encourage them to contact us if they have questions or concerns," a spokesperson said in an email.

"We will continue to monitor and take action in line with our policies and strongly encourage people to use all available reporting and blocking tools," a spokesperson said in an email.

Russia asserted Saturday that its troops and separatist fighters had captured a key railway junction in eastern Ukraine, the second small city to fall to Moscow's forces this week as they fought to seize all of the country's contested Donbas region.

The Supreme Court of Canada’s ruling allowing the Quebec City mosque shooter to be eligible for parole after 25 years is raising concern for more than a dozen similar cases.

A seven-person civil jury in Virginia will resume deliberations Tuesday in Johnny Depp's libel trial against Amber Heard. What the jury considers will be very different from the public debate that has engulfed the high-profile proceedings.