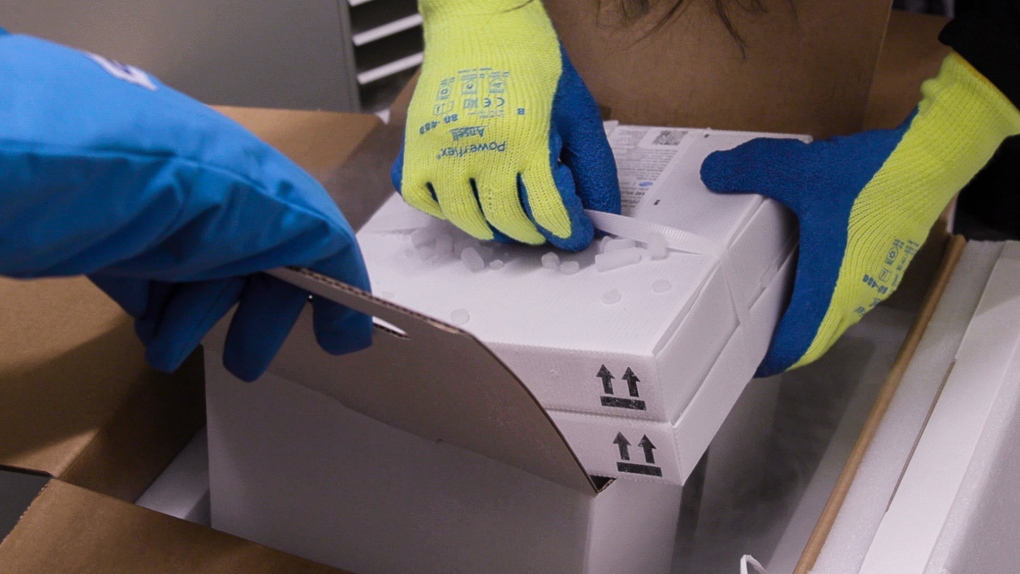 Workers unpack the first 4,000 doses of COVID-19 vaccine that arrived in B.C. in December. (Province of BC/Flickr)

VANCOUVER -- By the end of the day Friday, COVID-19 vaccines will have been distributed at every long-term care and assisted-living facility in the Fraser Health region.

The health authority announced in a news release Friday that all 151 such facilities in its jurisdiction have either completed vaccine clinics or were scheduled to do so by the end of the day.

Fraser Health did not indicate whether that means every resident of long-term care or assisted-living will have received a first dose of either the Pfizer or Moderna vaccine by the end of the day, nor did it indicate whether all staff members at such facilities will have been vaccinated.

CTV News Vancouver has reached out to the health authority for more information.

Among those who have received the vaccine in the Fraser Health region is JaHyung Lee, Canada's oldest man. According to Amenida Seniors Community, the Surrey assisted-living facility where he lives, the 110-year-old received his first dose of the Pfizer vaccine on Thursday.

In addition to the vaccine news, Fraser Health announced Friday that an outbreak of COVID-19 at Cedar Hill residence in Langley Memorial Hospital had been declared over.

The health authority also confirmed an outbreak at Maple Ridge Seniors Village, where one staff member has tested positive for the disease. Provincial health officer Dr. Bonnie Henry announced the outbreak - the facility's second - during her live briefing on the pandemic on Thursday.

The previous outbreak at Maple Ridge Seniors Village involved only a single staff member who tested positive, and was declared over in early September, according to outbreak data from the provincial Ministry of Health. The Cedar Hill outbreak involved seven cases, all among staff members.

Fraser Health has seen more care home outbreaks during the pandemic than any other health authority. As of Thursday, there were 26 ongoing outbreaks in the region, including two - at Agecare Harmony Court Care Centre in Burnaby and Hilton Villa Seniors Community in Surrey - where more than 100 people have tested positive.