VANCOUVER -- The number of daily COVID-19 infections in B.C.’s most populous health authority far outstrip the national average, and per capita cases are in line with Canada’s hardest-hit provinces, according to an analysis by CTV News Vancouver.

The Fraser Health region is seeing the same per capita infection numbers as Alberta and Nunavut, and isn’t far behind Manitoba, where the coronavirus is spreading so quickly there are now “code red” restrictions in Winnipeg and a test positivity rate of 14 per cent. 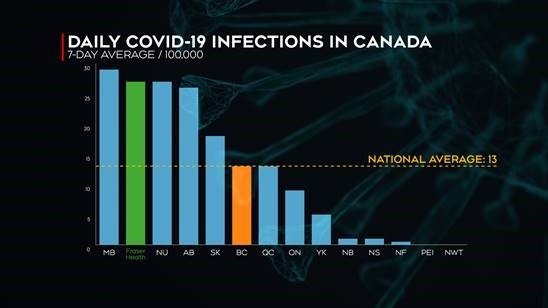 Vancouver Coastal Health has about 13 cases per day per 100,000 (about 160 cases for 1,193,977 people), while the provincial average is between 13 and 15 per 100,000, depending on which government agency is reporting the numbers. National figures come from the Canadian Health Infobase, while B.C. stats are from the B.C. Centre for Disease Control.

When CTV News asked B.C.’s top doctor about the surge of COVID-19 infections in Fraser Health, she expressed grave concern about the trend.

"We are in a very critical time right now and we are seeing far too many people being infected with this virus and that’s now being reflected with our hospitalization and people in (intensive care)," said provincial health officer Dr. Bonnie Henry, though she rejected the idea of a “red zone” or “hot zone” designation – similar to what other health officials have implemented across Canada – for Surrey.

"We've seen a decrease in cases related to and outbreaks related to parties and weddings and Diwali – we've not seen a surge of people at those types of celebrations, so that's a positive thing,” said Henry. “We have a pretty good idea of where transmissions are happening. That's why we've put in some of the restrictions we did with indoor group fitness activities, for example. We put restrictions and eventually closed down nightclubs and certain bars and banquet halls."

Ontario has implemented lockdowns for both Toronto and the Peel region until Dec. 21 – the kind of regional approach the B.C. government has largely rejected since the start of the pandemic. 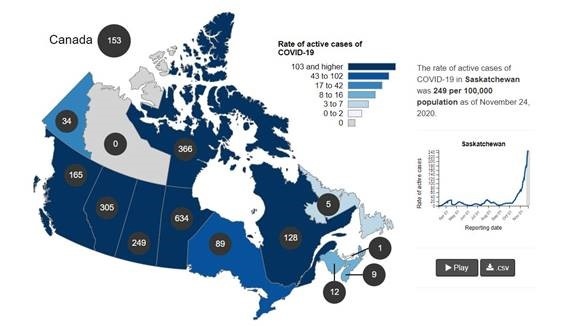 While those numbers are all alarmingly high compared to the first wave of the virus in the spring and the low rates most provinces enjoyed in the summer, they’re still dramatically better than the United States. On Wednesday, the U.S. was averaging 52 cases per 100,000 Americans, while some states had shockingly high numbers: 155 per 100,000 in North Dakota and 136 in Wyoming.

If B.C. had the same infections as North Dakota, per capita, that would represent more than 8,000 cases per day. The land-locked state is averaging 1,178 cases per day in a population of just 761,723. Citizens of both Dakotas have rejected the idea of mandatory masks and have seen the highest per capita infection rates in the U.S. since September.