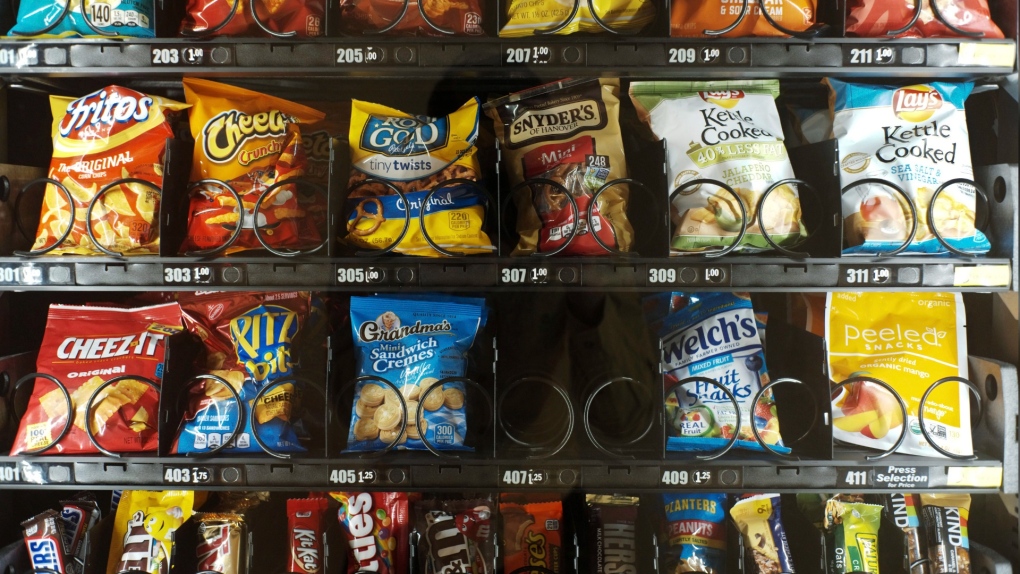 Snacks are on display in this file photo of a vending machine.

The Vancouver School Board owes a former vending machine operator $1,000 in damages, after a B.C. judge ruled the company’s contract was wrongfully terminated.

The contract began in 2015 and was terminated by the school board two years later over Ma's alleged lack of compliance with the board’s vending machine healthy food guidelines.

In response, Ma filed a lawsuit seeking $35,000 in damages. He testified in court that he was only aware of one example where the school let him know he’d gone against guidelines by including an instant noodle pack in the vending machines.

The principal of the school at the time told the court Ma’s vending machines offered “do not sell” food products, expired food products and toys on multiple occasions.

According to the decision, November 2016 is the first time the school warned Ma about the breach of guidelines. That warning was followed by another in February. When the two parties met later than month, the ruling states Ma was reminded of the guidelines and the key role they played in his contract with the school.

The issue escalated in early July of that year when, Ma testified, he went to restock his vending machines at Van Tech and saw a retail shop was selling instant noodles to summer school students.

This shop, the VSB explains, is run by students enrolled in the small business program, meaning school administration isn’t involved.

On two occasions in July, Ma attempted to gather photographic evidence that products were being sold inside the school that did not fall under the VSB’s vending machine guidelines.

During the first, the school's vice principal alleged that Ma got into "a physical altercation" with him, something Ma denied. The vice principal was trying to intervene to enforce a student safety policy that prohibits photographs being taken inside schools without parental consent.

In his defense, Ma said no students were in any photographs he took.

Following his confrontation with the vice principal, Ma was sent a letter from the VSB advising him he was no longer permitted on site at Van Tech. If he showed up, Ma was warned, police would become involved.

Instead of terminating its contract with Ma, the VSB should have advised him about the safety protocols for students that prohibited photographs, according to judge Gregory M. Rideout's decision.

“I find that it is clear the defendant was looking for a way of terminating (Ma's) contract with the defendant in July 2017,” reads the decision.

While Rideout reasoned that the VSB may have been frustrated by Ma’s response to the summer school shop, the judge did not find his "disruptive conduct amounted to a repudiation of the contract.”

Ma was awarded less than three per cent of the damages he was seeking because the judge found he failed to disclose financial documentation proving he’d lost $35,000 as a result of the contract being terminated.

In addition, Rideout found Ma did not exercise “due diligence in relocating the operational vending machines at the earliest opportunity,” and said his testimony was “unreliable and inconsistent.”

The PoMa Vending machines at Van Tech were removed by the school at its own cost, and taken to a VSB warehouse. Ma relocated four of the machines to other high schools to mitigate losses before selling his business in 2019, according to the decision.

Justice Minister David Lametti says he will "look at" a federal policy that restricts gay and bisexual men from donating to sperm banks in Canada, after CTV News exclusively reported on Wednesday that a gay man is taking the federal government to court over it.

Former Wagner commander says he is sorry for fighting in Ukraine

A former commander of Russia's Wagner mercenary group who fled to Norway told Reuters he wanted to apologize for fighting in Ukraine and was speaking out to bring the perpetrators of crimes to justice.

As rates of sexual assault climb across Canada, nursing experts say there is a shortage of specially trained forensic nurses to properly care for victims.