Former Coast Guard hovercraft could be yours for $750K

The federal government is about to take bids on a very unusual item.

A former Coast Guard hovercraft known as Penac has been posted for sale on a government auction site.

The rescue hovercraft was used for more than a decade in search-and-rescue missions along B.C.'s coast before being removed from service in 2017.

Originally named the Liv Viking, the ship was built to be a passenger ferry in Denmark, but was never put into service after the route was replaced with a bridge.

In 2004, the Canadian Coast Guard bought the vessel from the manufacturer, British Hovercraft corp., rebuilding it for life-saving missions.

"It was stripped down pretty well to the skin and refit for our purposes," Officer in Charge Bruce Briggs said. "Over its life here it’s been involved in hundreds of missions."

Briggs specifically noted one rescue mission over the 2010 Easter weekend.

The Penac was called out to a sailboat with six people on board that was taking on water during a race in rough conditions.

According to Briggs, there were "sustained winds of 50 knots (92 km/h) with four- to five-metre seas. They were able to save four people from the water; the other two were previously saved." 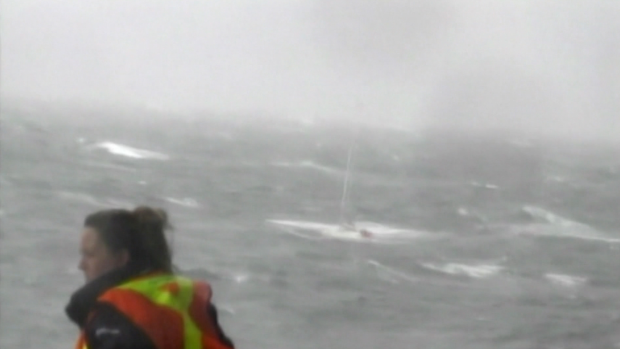 Penac was used in hundreds of missions, including this one over the 2010 Easter weekend when it helped save people from a sinking ship.

The Penac didn’t emerge from that rescue unscathed.

"Just due to the amount of wind and weather the skirt system was extensively damaged," Briggs said. "They had to keep travelling downwind … and have our engineers do emergency repairs to get home."

Now it's looking for a new home.

Regional Manager of CGSurplus Julie Balantes said it’s one of the bigger, more unique items that’s ever been put up for auction.

To the best of her knowledge, it’s the only time a Coast Guard hovercraft has been auctioned off.

"Somewhere, there’ll be somebody who’s interested in it," she said.

In the event that the reserve price isn't met, GCSurplus may consider bids submitted at a lower amount or cancel the sale.

There are several criteria the winning bidder will have to meet before they can take the ship home: the hovercraft will need to be registered with Transport Canada; plans for taking the ship off the Coast Guard base will need to be submitted and approved; and, along with other conditions, the purchaser will also need to show proof of marine insurance.

The hovercraft does need some work.

On the bridge, most of the communications and navigation systems have been removed and there are crates of spare equipment in the cabin.

There is also mention of an oil leak in one of the lift engines. But no need to worry: included in the sale are two shipping containers full of spare parts.

But the most important thing?

"It does run," Briggs said.

"After sitting for almost two years, we put some batteries in it and fired it up and relocated it. So it ran recently."