Multiple drivers ran over a firefighting hose in South Vancouver on Friday, impacting an already tense effort to douse the flames at a two-alarm house fire.

"This is an extremely dangerous situation. We have crews inside that building fighting that fire who rely on that water to keep them safe," Connelly said.

"If they lose that water while they're in there, it's catastrophic."

The firefighter said they were fortunate the incident only resulted in a "partial failure," and the supply line was still useable.

The fire broke out around 9:30 a.m. at a property near Ash Street and 61 Avenue, while a number of people were inside the home. Authorities said it appears everyone made it out safely, and no firefighters were injured while extinguishing the flames.

Connelly said crews always do their best to avoid laying supply hoses across busy streets, but that wasn't possible during Friday's effort.

"Today was one of those days where we had no option but to place our hose lines on a busy street, Cambie Street," Connelly said. "Many cars – not just one or two, but many cars – were driving over our supply line, and we need people to know it's extremely dangerous."

Driving over firefighting hoses is also illegal, and Vancouver Fire and Rescue Services said it has asked police to track down the motorist who broke their supply line. 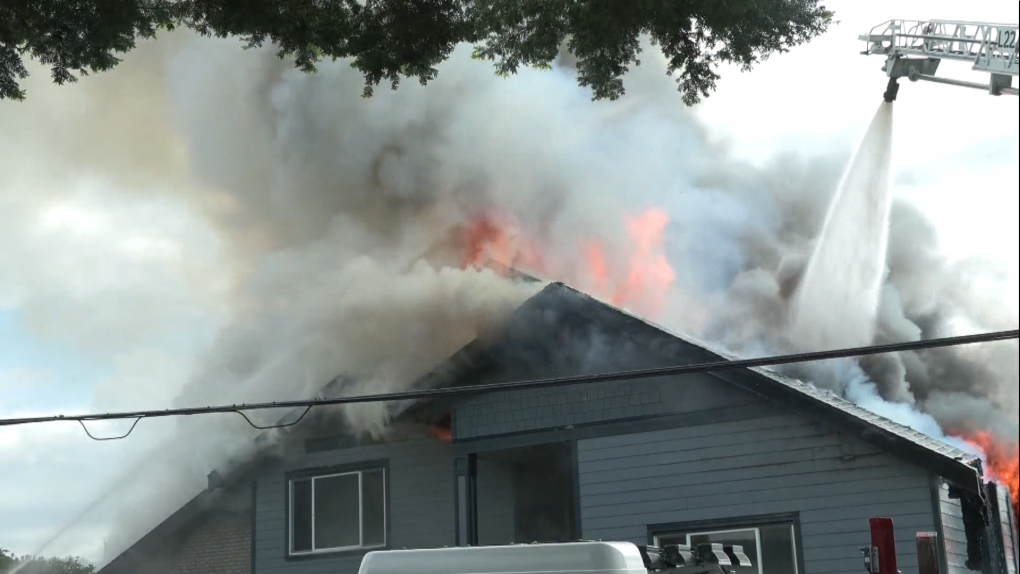 "Luckily there's some surveillance cameras in the area so we will be asking (the Vancouver Police Department) to pursue that," Connelly said.

Frustrated firefighters have issued public reminders about the dangers of running over hoses before, including back in 2018, when a motorist drove over a supply hose in East Vancouver and caused it to split, sending a geyser of water into the air.

Authorities said the hose was worth about $1,000, but the fine for driving over it is just $81.

The cause of Friday's fire has not been determined. Brandon Schell, a tenant who lives downstairs, told CTV News the upstairs unit has been undergoing renovations.

Schell said he learned about the blaze when someone came frantically banging on the home's front door.

"We were just listening to my Will Smith CD," he said. "Someone came knocking on the door and they said the fireplace, the smokestack, the chimney was on fire."

Schell said he has insurance, but is still worried they could lose all of their possessions in the fire.

"Everything we own is in the house," he said. "Some things you can't replace, right?

Canada has signed an agreement to upgrade the NATO battlegroup it leads in Latvia to a brigade, a move that signals its commitment to the military alliance while continuing to resist calls to boost defence spending.

Canada's transport minister is speaking out about the 'unacceptable issues' that continue to result in significant delays. He says the federal government has done everything in its control to fix the issue.