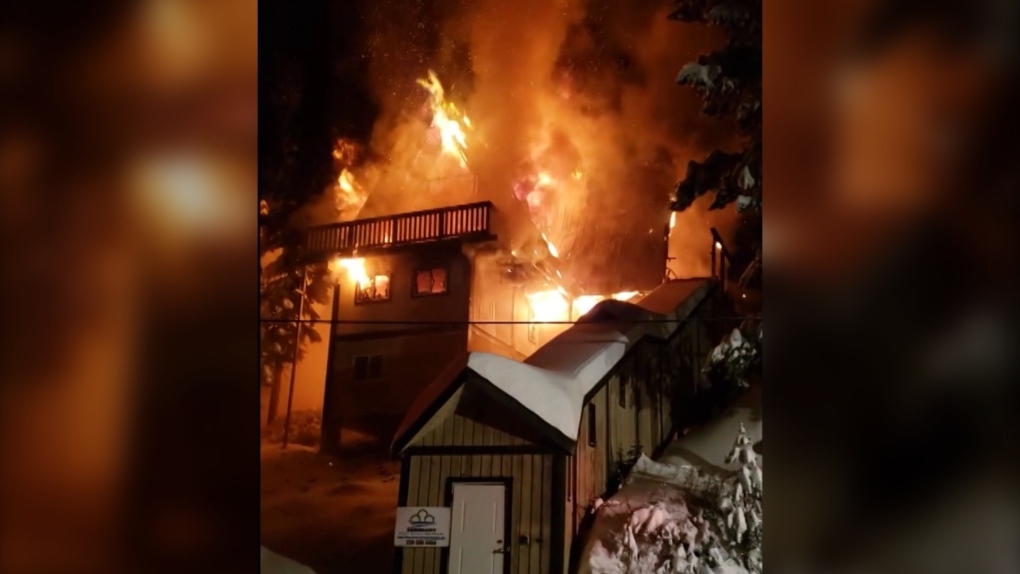 A fire at a house at Big White Ski Resort caused major damage to the wood-frame building. No one was home at the time of the fire. (Castanet)

No one was in the three-storey home at the time of the fire, but the roof and interior floors collapsed during the blaze and the building was heavily damaged.

Big White Fire Department Chief Chris Cormack said fire crews responded to a report of fire on Porcupine Road at Big White at around 1:45 a.m. Friday morning. They found a three-storey wood-frame house on fire, with heavy smoke and flames coming out of the second and third storey, and out through the roof.

Firefighters focused first on making sure the fire didn't spread to the houses on either side by soaking down those buildings with water, Cormack said. They then turned their attention to the house that was the source of the fire, and managed to extinguish the fire by around 4 a.m.

Battling the fire took 18 firefighters, two engines and three support vehicles, and snowy conditions added to the challenge, Cormack said, as firefighters worked in waist-deep snow as they made their way around the house.

The cause of the fire is not yet know, but is under investigation.

A previous version of this article referred to Chris Cormack as Kelowna's fire chief. He is the chief of the Big White Fire Department.