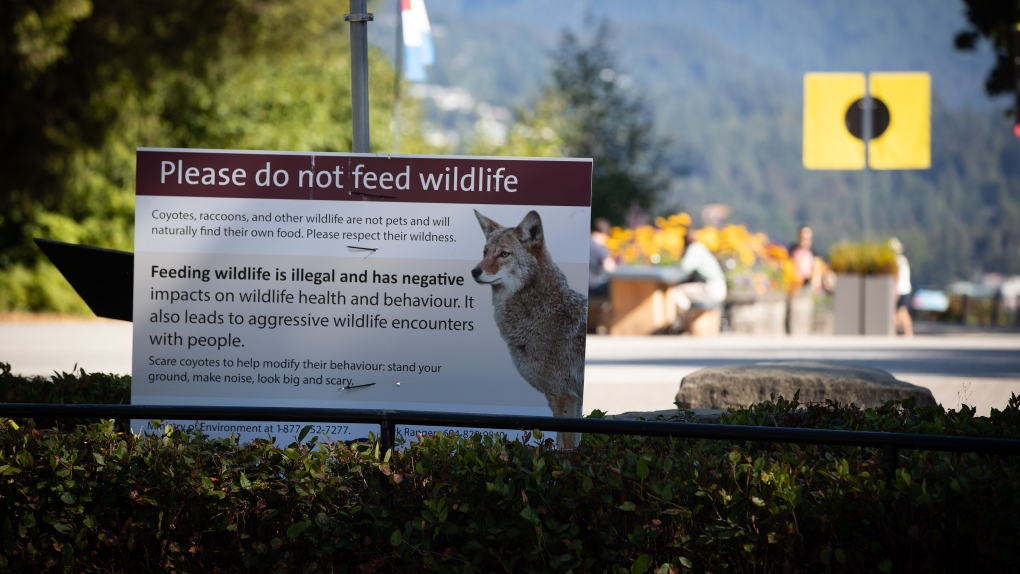 A sign warning people not to feed wildlife is seen at Stanley Park after numerous people have been attacked by coyotes, in Vancouver, on Thursday, Sept. 2, 2021. (Darryl Dyck / THE CANADIAN PRESS)
Vancouver -

In the wake of Vancouver's largest park needing to be closed overnight while officials tried to cease a string of coyote attacks, the city's park board is proposing new bylaws and possible fines meant to stop people from feeding wildlife.

Prompted by a recommendation from the general manager of the Vancouver Park Board, commissioners will discuss on Monday possible changes to bylaws regarding feeding wildlife in parks. If passed, the changes could also permit bylaw officers to ticket people up to $500.

"Human feeding of wildlife interferes with normal foraging, hunting and population numbers. It is physically unhealthy for animals, and encourages food-conditioning that can lead to aggressive behaviour," the recommendation to the park board says.

"While the B.C. Wildlife Act includes provisions against feeding 'dangerous wildlife,' provincial enforcement resources are stretched, and the restrictions do not extend to other urban wildlife."

Access to Stanley Park was limited for weeks following a series of coyote attacks on adults and children. Some trails were blocked, and the park was closed at night.

This week also marked the end of a province-led coyote cull in the park. At one point, representatives from the Ministry of Forests said it was possible as many as 35 coyotes would be trapped and euthanized by contractors. In the end, just four coyotes were trapped and killed as part of the two-week cull. Seven others were killed before the cull began.

Not long after the park reopened fully, two people were allegedly caught feeding coyotes. The individuals, only identified as residents of the province's Lower Mainland, were arrested by provincial conservation officers and their vehicle was seized.

Right now, the local park board's bylaws regarding feeding wildlife are nearly non-existent. The current rules say people can't "deposit food or grain on any area in a park except in litter cans provided by the board for the purpose of receiving garbage and litter." Where garbage cans aren't provided, park guests must take litter with them.

Instead, the general manager recommends adding a section that specifically targets feeding wildlife, similar to what's in the province's Wildlife Act. One difference in the proposal, however, is to remove "dangerous" from the description, and broaden the rules to all wildlife.

"This new bylaw would apply to all wildlife because feeding even small animals increases the amount of prey available for dangerous wildlife, which have greater potential risk to humans," the recommendation says. "Additionally, feeding wildlife is physically harmful for all animals."

The board says some of the other species in Vancouver parks that are known to he fed by humans – whether directly or indirectly – include geese, ducks, pigeons, squirrels and raccoons.

In full, the proposed changes to the Vancouver bylaw would include adding the following section:

"A person must not:

(a) feed or attempt to feed wildlife in any park;

(b) provide, leave or place an attractant in any park in a manner that attracts or could attract wildlife."

"Once enacted, it will be more clear that feeding any wildlife, either directly or indirectly, is prohibited in Vancouver parks and anyone contravening these bylaws may be fined," the recommendation says.

"This will assist with deterring this harmful behaviour and support the park board’s ongoing efforts to increase the amount and ecological quality of Vancouver’s natural areas to support biodiversity, enhance access to nature, and foster a healthy co-existence with urban wildlife."