Fewer condos, more space for families: board of trade on affordable housing

One of the keys to unlocking Metro Vancouver's housing affordability crisis is a focus on building more space for middle class families, the Greater Vancouver Board of Trade says.

In a report issued this month, the board offered up seven suggestions for how the region could improve its "D" grade in affordability and economic competitiveness.

The low score was handed down by the board as part of an annual assessment of Metro Vancouver's economic health. The scorecard highlights key issues like transit infrastructure, education and tax rates, then includes suggestions on where the board should focus its public policy efforts for the year.

The scorecard defines housing affordability as a measure of housing costs relative to income. In this case, the high cost of living in the Vancouver area means residents need to earn more to get by, but wages cannot sufficiently support the high cost of housing.

The most recent report ranked Vancouver as 15th out of 17 jurisdictions looked at by the board. Vancouver fell between Sydney, Australia, and Shanghai. Hong Kong was in last place, while Houston was in first in terms of housing affordability. 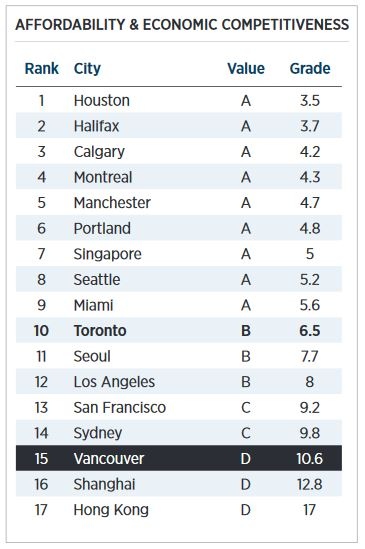 The board blames a combination of high demand, inadequate volume and a lack of diversity of housing types for the city's soaring house prices for both buyers and renters.

It warns that unaffordability may be a disincentive for some businesses to move to Vancouver or expand operations in the area.

The report makes seven suggestions for how to improve the low grade, including collecting data on development processes and pre-zoning areas before housing development to adequately support transit routes. Details on the suggestions are available in its 19-page report.

One of the largest issues facing Vancouver residents, and therefore the report's top suggestion for ways to improve, is the fact that the middle class has been priced out of the market.

Titled "The Missing Middle," a section of the report suggests developers and planners base housing plans specifically on the middle class.

The board said the majority of current housing options in the city and environs are detached single family homes – which are unaffordable to those in the middle – and small condos that can't support growing families.

"Greater Vancouver struggles to attract people between the ages of 25 and 34, a highly desirable and productive demographic, that is also the demographic that tends to start families," the report said.

Recent data from Generation Squeeze -- a national campaign lobbying politicians based on issues facing Canadians in their 20s, 30s and 40s -- suggests it could take the average person in that age group 12 years to save enough to make a 20 per cent downpayment on the average Vancouver home.

The hope is that young adults will be drawn to Metro Vancouver if they can afford to live in accessible neighbourhoods, in affordable housing with room to raise a family.

While recent housing data suggested the Vancouver housing market was dipping, in part due to a foreign homebuyers tax that came into effect in August, sales data from recent months hinted that a rebound may be in the city's future.

A report released Tuesday by real estate giant Royal LePage said the benchmark home price in the first three months of 2017 was $1,179,482 – up 12.3 per cent year over year.

"Vancouver house prices are up compared to the first quarter of 2016, yet this doesn’t tell the complete story," Royal LePage president Phil Soper said in the report.

Soper said sales activity was down 40 per cent compared to "recent norms," a dip that suggested to some that Vancouver was due for a housing correction. But now, there is reason to believe the correction will be short-lived, he said.

"The principal victims of the B.C. government’s foreign buyer tax were Canadians who had planned to sell or buy a home and were frightened away by unsubstantiated rhetoric in which the Chinese were entirely to blame for Vancouver’s housing shortage," Soper said.

But, he said, as much as 90 per cent of the region's housing activity that was halted by the tax was from Canadians, not foreign investors.

Many were waiting to see what would happen and put off making sales or purchases, but months later, homebuyers "may be ready to rush back into the market," Soper said.

"An unfortunate side effect of heavy-handed regulatory intervention is that we risk market whiplash. In the coming weeks, it is possible that six months of pent-up demand will be unleashed on the market, sending prices sharply upward again."

Toronto looking to Vancouver for example

Toronto ranked 10th on the Greater Vancouver Board of Trade's list, scoring a grade of "B," but Royal LePage said prices in the first quarter "reached new heights" in Canada's largest city.

The steep climb in prices has officials in the city and in Ontario looking toward the Lower Mainland for solutions.

Nearly two months ago, Toronto Mayor John Tory said the city is mulling the idea of a new tax on vacant homes, an idea approved in Vancouver in the fall.

On Tuesday, the mayor met with the federal and provincial finance ministers to discuss Toronto's shrinking rental supply, the vacant tax and a lack of data kept on the city's real estate market.

The meeting came just over a month after Ontario Finance Minister Charles Sousa said he was considering a number of options including a foreign buyers tax. He said it was not clear yet whether foreign buyers were responsible for driving up demand.

At the meeting, the trio decided not to introduce any measures that would further boost demand and drive prices even higher.