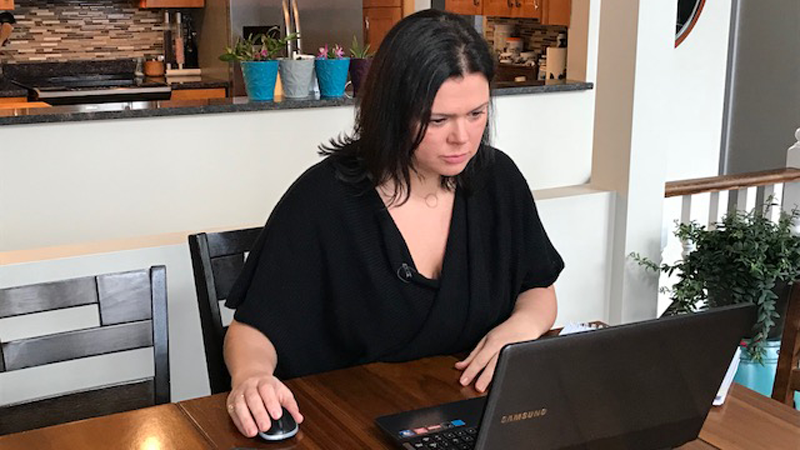 Isabelle Bailey from Shovel Squad monitors weather conditions on her laptop on Feb. 8, 2019.

When snow is in the forecast for the Vancouver area, most of us get nervous. But Isabelle Bailey doesn't worry.

“When the snow hits we’re actually pretty calm,” she said. That's because her company has 100 people on standby and ready for snow removal.

Snow Queen has been in the business for a number of years servicing commercial, retail and strata customers, but then Bailey realized there was demand from homeowners who weren’t able to shovel their driveways themselves.

“Nobody else was doing this...there was no one to call up," she said. "I decided to launch Shovel Squad.”

Bailey says Snow Queen and its offshoot Shovel Squad are the only female-owned and operated winter service providers in the country, with a team of five women working with her to monitor, co-ordinate and dispatch 120 men and women to service Port Moody, Coquitlam and Port Coquitlam.

“There’s a feminine touch to the way I do business so why not have women manage it with me...we are self-employed women who are creating our own empires.”

The company developed an interactive app that uses satellite technology to zero in on an address, measure the specific area that needs to be cleared and provide an exact quote based on accurate square footage within minutes.

Right now the app is being tried out just in the Burke Mountain area but targeted for use in the whole lower mainland by January 2020.

Bailey smiles at the thought of heavy snowfalls forecasted in the coming days.

“What snow is, is dollar bills in the sky but it’s a gambling game," she said. "A lot of the times you’re spending a lot of money not knowing if you’ll ever make it back but when it snows...it’s fun.”