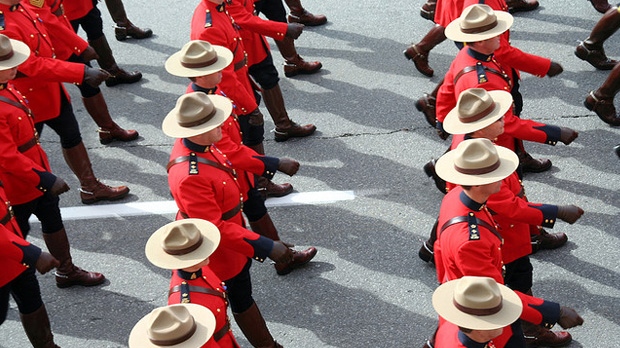 Lines of marching RCMP officers are seen in this file image. (Pedro Lopez)

A female RCMP officer from British Columbia has been docked 20 days' pay after making a lewd comment to a male colleague and later squeezing his genitals.

Const. Valerie Little was working at the Vernon RCMP detachment when the two separate incidents happened between November 2009 and February 2010, according to a disciplinary report from January.

While the constable contested the allegations, the RCMP's Conduct Board determined they were credible "on a balance of probabilities." She was ordered to forfeit almost three weeks' worth of pay and 10 paid vacation days, and won't be eligible for a promotion for two years.

The first incident took place while Little and another constable, identified only as A.F. in the report, were on duty watching a live video feed of officers interviewing a suspected sex offender.

The suspect was discussing his sexual preferences when Little put her hand on A.F.'s thigh and whispered something to the effect of "I like to take it from behind," according to the disciplinary report.

The second happened while they were off-duty but representing their detachment in a community broomball tournament. A.F. said Little approached him while he was leaning against a wall, then squeezed his genitals and said, "I see you're not wearing a cup."

The constable testified that he felt shocked and embarrassed by what happened, and walked away without saying anything.

A.F. said he asked a respected senior officer for advice on whether he should file a sexual misconduct complaint shortly after it happened, and was upset when she initially chuckled in response.

That senior officer, identified as Mrs. K.S. in the report, testified that she remembered the conversation and that she advised him not to speak out because she didn't trust the people who were then leading the detachment to deal with it properly.

Looking back, Mrs. K.S. recognized she had a duty to report it herself and that she failed in her obligation to do so.

Instead, the senior officer said she tried to resolve the situation by making an offhand comment to Little that was something to the effect of: "You gotta keep your hands to yourself it'll get you in trouble."

A.F. left the detachment in 2011 without speaking about either incident to Little. He only came forward in 2018 after learning that she was transferring to his current detachment on Vancouver Island.

"He was completely overwhelmed and never thought that he would see her again," the report reads. "He felt stuck and knew he could not work with her as he was afraid something else may happen."

While the RCMP Conduct Board described Little as a generally credible witness, with positive performance evaluations and no prior disciplinary record, it found her testimony to be "embellished and editorialized" in comparison with A.F.'s.

The board also found A.F. more believable, in part, because he seemed anxious and uncomfortable coming forward. It would have been "less embarrassing and stressful" to simply keep the incidents to himself, the board wrote, while speaking out "subjected him to making public statements and testifying."

On top of the order docking Little's pay and temporarily barring her from promotions, the RCMP Conduct Board said she is not to be posted at the same detachment as her accuser.

Little was not fired due to a number of mitigating factors, according to the board, including that she displayed an effort at "bettering herself personally and professionally" by earning a university degree and having weekly meetings with a psychologist.