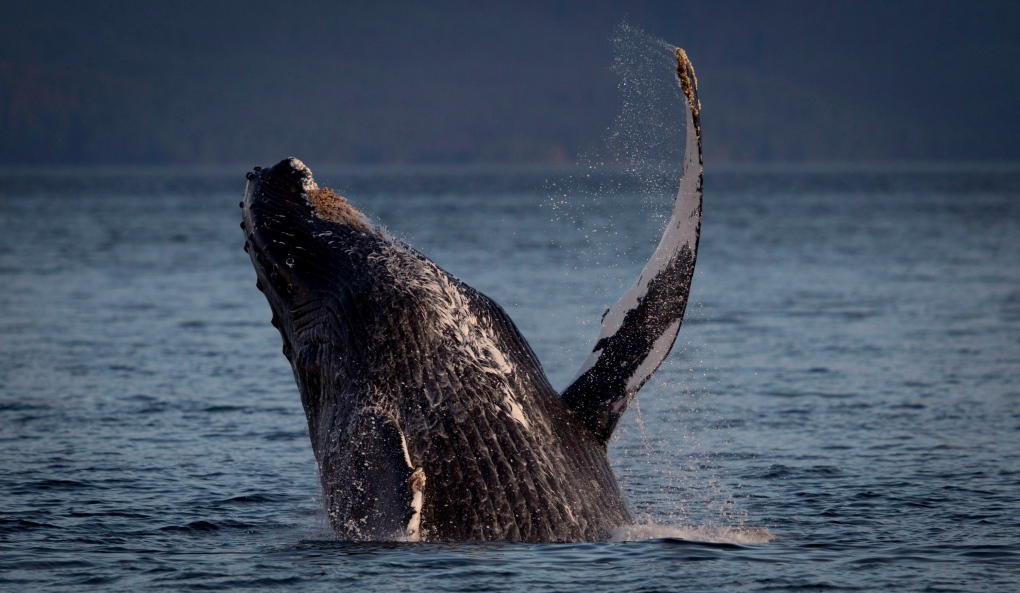 A humpback whale breaks through the water outside of Hartley Bay along the Great Bear Rainforest, B.C., Tuesday, Sept, 17, 2013. (THE CANADIAN PRESS/Jonathan Hayward)

VANCOUVER -- After a five-year delay, the federal government has published a final recovery strategy for humpback whales off the West Coast that recognizes shipping traffic and toxic spills as threats to critical habitat.

"Definitely this recovery strategy creates another very strong impediment to Enbridge and to the presence of oil tankers in that area," said Susan Pinkus, whose group Ecojustice was part of a lawsuit launched last year attempting to force the federal government to protect the habitat of the whales and three other endangered species.

"There's very little doubt that oil tankers threaten the whales and their critical habitat in a variety of ways," Pinkus said.

The published report noted a recent increase in the overall population of North Pacific humpbacks, saying there are an estimated 2,145 animals off the West Coast today compared to a minimum of about 4,000 in 1905, before the population was decimated by commercial whaling.

It identified four critical habitats that will have to be protected off the B.C. coast, including Johnstone Strait off the northeast end of Vancouver Island, Juan de Fuca Strait on the southwest end of the Island, Dixon Entrance and the Inside Passage, off the central and north coasts.

And it said activities that may threaten recovery include vessel traffic, toxic spills and overfishing, as well as activities that cause acoustic disturbance, such as seismic exploration and sonar.

The strategy said future development generally of coastal and offshore areas is a risk for the whales. The authors cited the 2010 blowout of an oil platform in the Gulf of Mexico as a reminder of the potential for disaster.

"Even with very low odds and excellent safety records, catastrophic events can lead to undesirable outcomes," the report said.

"Proposed pipeline projects, associated tanker traffic, and possible offshore oil and gas exploration and development in coastal British Columbia all increase the likelihood of toxic spills in humpback whale habitat in the future, and underscore the importance of protecting critical habitat and supporting mitigation measures and plans."

There were 21 reported vessel strikes on humpbacks off the B.C. coast between 2001 and 2008, the report says, and tanker traffic is poised to increase.

The Northern Gateway pipeline proposed by Calgary-based Enbridge (TSX:ENB) would deliver 525,000 barrels of petroleum a day to a tanker terminal in Kitimat, on the north coast of B.C. Kinder Morgan's Trans Mountain plans would increase capacity from 300,000 barrels a day to 890,000 for shipment from B.C.'s south coast.

Traffic into the Trans Mountain terminal in Burnaby would increase from about eight vessels per month, to about 28. The Northern Gateway project would bring about 250 tankers a year into Kitimat, and the province's planned liquefied natural gas industry will bring more.

"It's extremely difficult to imagine how large tankers filled with oil and humpback whales can co-exist in those narrow fiords in Douglas Channel," Pinkus said.

"We're hopeful that with the critical habitat legally identified it will get the protection it deserves."

Scott Wallace of the David Suzuki Foundation said the strategy clearly defines the areas of critical habitat, and will begin offering some protection for that habitat in 180 days.

There will be some interpretation of what critical habitat means, but it's a recognition of the legal requirements of the species at risk law, he said.

"It's not a weak strategy, it's not watered down. It recognizes the science," Wallace said.

"In the past there... particularly with the killer whale strategy, there have been attempts to remove the idea that there's critical habitat. This one doesn't do that."

Under the federal Species At Risk Act, an action plan for recovery must be completed within five years.

Wallace said there remain 175 other threatened and endangered species for which final recovery strategies are overdue.