Looking back: Most-clicked stories on the CTV Vancouver website

Looking back: Most-clicked stories on the CTV Vancouver website 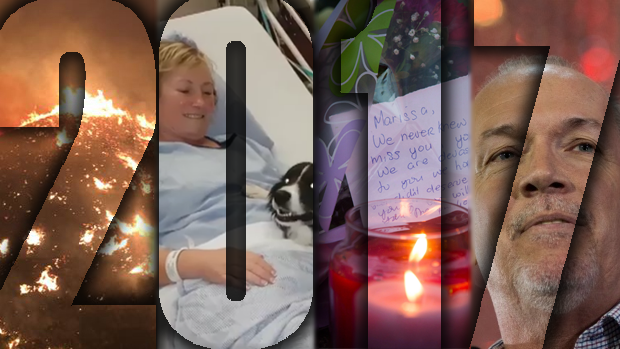 From natural disasters and human tragedies to remarkable rescues and gripping political power plays, there was no shortage of news in British Columbia this year.

Here are some of 2017's most-read and most-watched stories from the CTV Vancouver website, in chronological order. 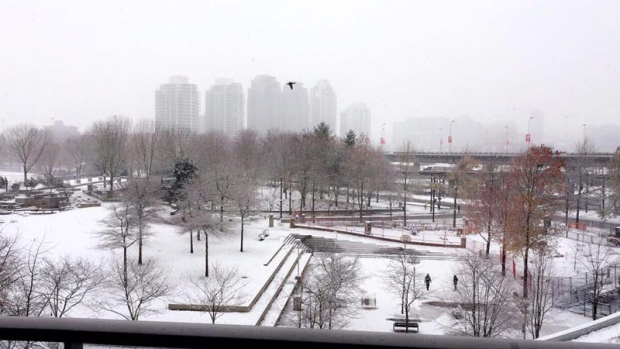 A three-month stretch of unusually snowy weather wreaked havoc on a region not used to so much of the white stuff.

The snow started early in December 2016 and fell heavily and often through to February, leaving the City of Vancouver with a bill for $1.28 million for road salt and sand – up eightfold from the same period the previous winter.

When store shelves emptied fast, municipal officials decided to offer free salt to the public. But supplies were quickly drained, and the city's park board had to issue a statement reminding the public it was illegal to steal sand from local beaches. 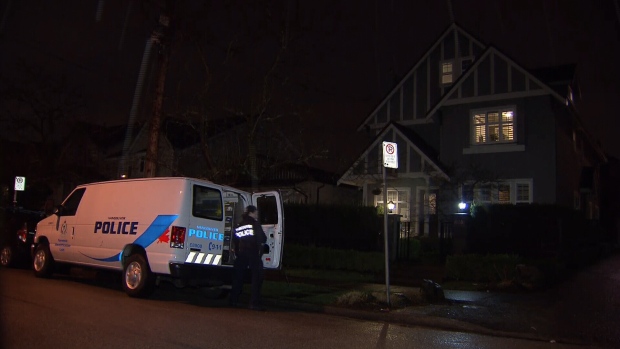 The January death of 16-month-old Macallan Wayne Saini, nicknamed Baby Mac, at an unlicensed daycare struck fear into the hearts of parents across the Lower Mainland, and pushed the issue of child care availability to the forefront. The details of Macs death remain unclear, but the daycare centre was later found to have broken the law by caring for too many children at once on three occasions.

The toddler's parents, Chris Saini and Shelley Sheppard, called for "massive reform" to the daycare system, but said they felt snubbed after they penned a heartfelt letter to former premier Christy Clark.

During May's provincial election, then-NDP Leader John Horgan campaigned on a promise to bring $10-a-day child care to B.C., a move many say would improve safety for children across the province. The wording of that commitment, however, became vaguer following the NDP-Green pact that toppled the former Liberal government. 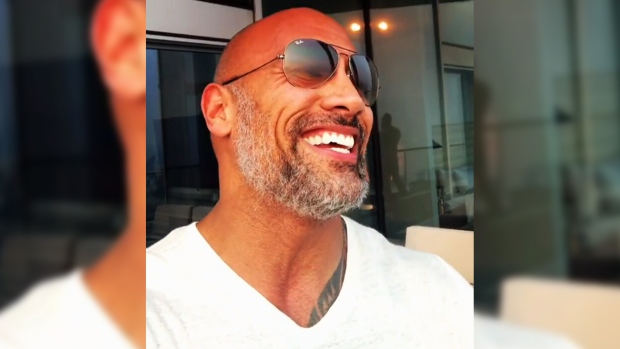 B.C.'s biggest city got mixed reviews this year from celebrities visiting on vacation and for movie and TV shoots.

Neil Patrick Harris started a year of headlines on a high note, praising Vancouver as a "fantastic city" for people with health-conscious lifestyles in an interview with the New York Times.

Olivia Munn paid a visit this summer, going tubing down the Fraser River with pint-sized co-star Jacob Trembaly, and Dwayne "The Rock" Johnson posted a video on Instagram about his two-decade-long love affair with Vancouver.

Vancouver-born Ryan Reynolds posted on social media in June, writing simply, "Good to be back," while U.S. talk show host Kelly Ripa revealed she was "blown away" by B.C. in two episodes of LIVE with Kelly and Ryan.

Three months after telling red carpet reporters how much she "pined" for Honey's Doughnuts in North Vancouver, "Titanic" star Kate Winslet was spotted in Metro Vancouver again in December stocking up on baked goods and dining on Thai food.

But not all reviews were glowing. "Riverdale" star KJ Apa said he didn't hate the city, but that after living in Vancouver for a while, he found it "kind of boring." He conceded that at least the food is good. 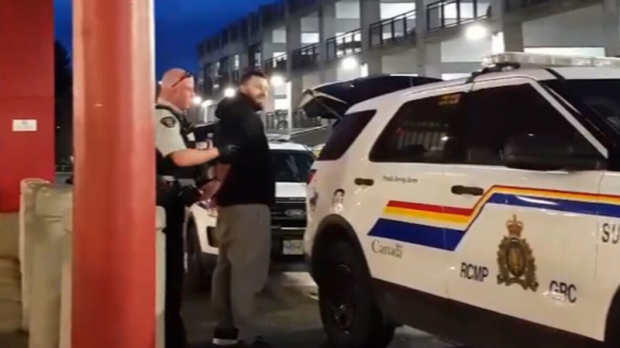 Online vigilantes from Surrey Creep Catchers earned thousands of fans across B.C. for their grassroots efforts to out sexual predators. But police have repeatedly discouraged their tactics, and it appears their refusal to listen to law enforcement might now be catching up with the Creep Catchers.

The Surrey chapter, and in particular its president Ryan Laforge, landed in hot water time and again in 2017. The controversial group is facing multiple lawsuits from people who say they were falsely accused, and separate orders from a Supreme Court judge and the B.C. Privacy Commissioner to take down some of their content. Laforge is also charged with assault and uttering threats in connection with a violent confrontation at a Surrey mall in the spring.

But so far, despite it all, the Creep Catchers have remained resolute.

6. Nail-biting election marks beginning of the end for Clark's government 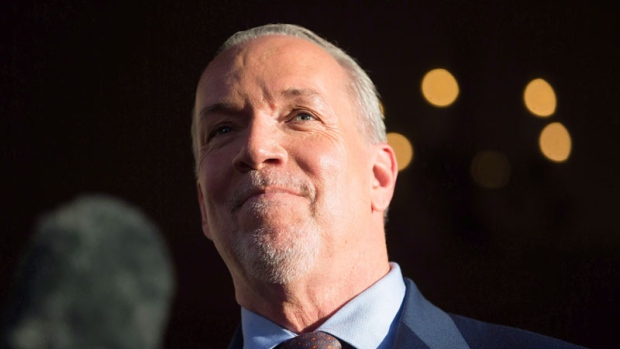 Emotions were high leading into the May 10 election, and many people across B.C. awaited the results with bated breath. Unfortunately for them, by the time Christy Clark and John Horgan turned in for the night well past midnight, the results were still clear as mud.

Even some keen political observers were left scratching their heads at how things would shake out with the BC Liberals claiming the province's first minority government since 1952. In the end, a fortuitous recount, a historic non-confidence vote and a power-sharing agreement with Andrew Weaver's Greens would ultimately propel Horgan's NDP to power and send the long-governing Liberals to the opposition benches for the first time in 16 years. 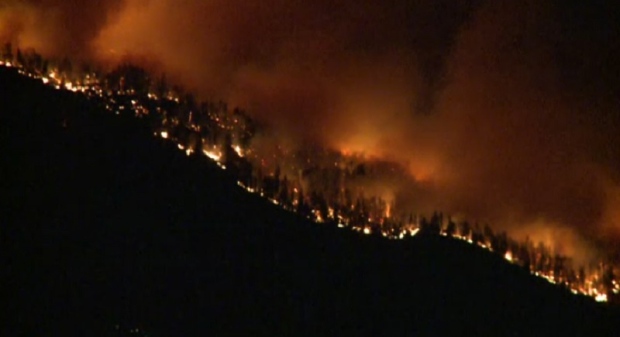 British Columbia was in a state of emergency for 10 weeks this summer as the most destructive wildfire season in recorded history burned through the province’s Interior, Okanagan and Cariboo regions. Between April and mid-September, hundreds of fires scorched nearly 12,000 square kilometres of forest and grassland. The infernos forced as many as 50,000 people out of their homes during the peak of the wildfire season.

Premier John Horgan says he has been pressing Prime Minister Justin Trudeau to help cover the $750-million cost of fire suppression and recovery efforts. Since then, Ottawa has matched the province's $100-million fund for relief programs. 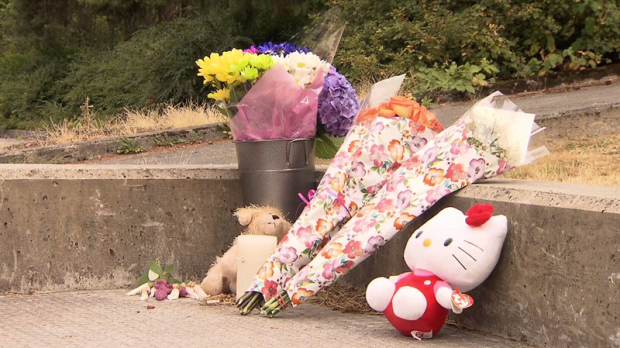 The murder of Burnaby teenager Marrisa Shen back in July left many people across the Lower Mainland shocked and heartbroken – and put parents in particular on edge. The 13-year-old victim shared the same interests as many people her age, from superheroes to video games, and was described by her grieving family as your typical teenager.

Months after the terrible crime, the public is still in the dark about who attacked Shen, and why. But the few details shared by police have been chilling, including their suspicion that the quiet, happy girl was targeted at random.

3. Tragedy on the 'Deadpool 2' set prompts questions about safety 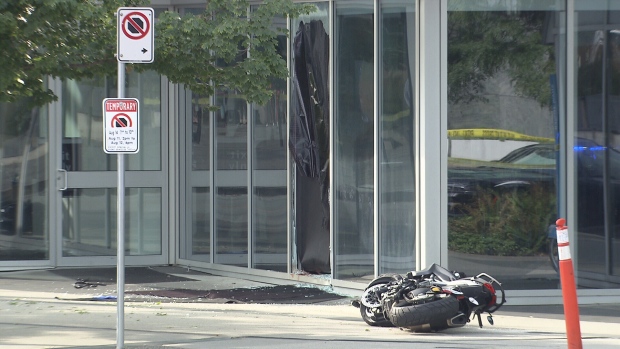 Filming of the raunchy, R-rated superhero series Deadpool has generated a lot of warm headlines in Vancouver, with star Ryan Reynolds posing for photo ops with local police and even taking a terminally ill fan on a virtual tour of the film set. But the tone changed in August after the tragic death of stuntwoman SJ Harris.

Harris, a 40-year-old racer who was doubling for lead actress Zazie Beetz, died after she seemingly lost control of her motorcycle in downtown Vancouver and crashed through a pane of glass at Shaw Tower. The incident made news around the world and, because she hadn't been wearing a helmet, also raised some questions about safety in Hollywood North.

While information from the production suggested the incident was a freak accident – Harris was only supposed to have made a left-hand turn travelling below 16 km/h – the terrible incident highlighted the risks performers take every day making blockbuster entertainment. 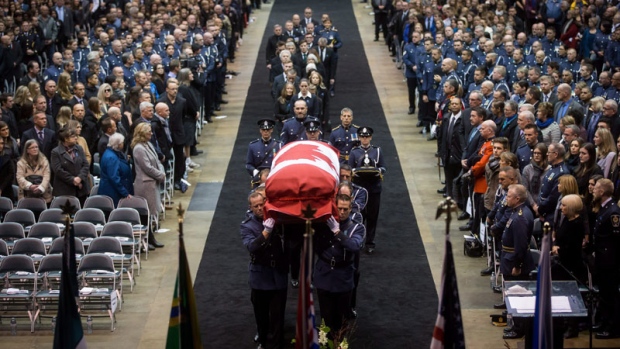 The shooting death of Abbotsford Const. John Davidson led to an outpouring of support across Metro Vancouver, culminating in an emotional procession of police cruisers and other emergency vehicles that carried his body from Vancouver General Hospital back to Abbotsford.

On Nov. 19, an estimated 10,000 people attended a regimental funeral for the fallen hero, during which several speakers who worked with Davidson remembered him as a proud father, a friend and a police officer with an unwavering commitment to keeping his community safe.

Davidson, 53, was gunned down on the morning of Nov. 6 as he responded to a call about a stolen vehicle near the Fraser Valley Auto Mall. A 65-year-old Alberta man named Oscar Arfmann has been charged in connection with the officer's death.

The Abbotsford Police Department was hit with yet another tragedy less than two weeks later, when the son of Deputy Chief Mike Serr was killed in a rollover in Maple Ridge. 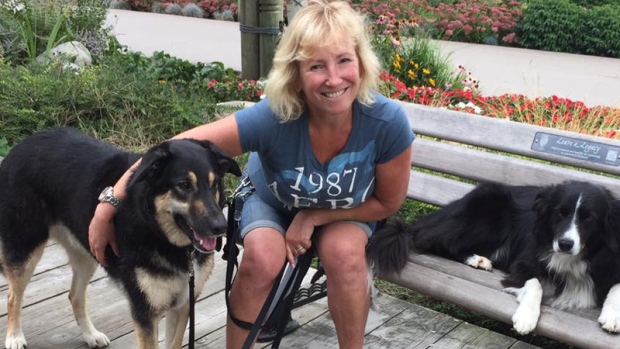 After many dark stories over the course of the year, the tale of dog walker Annette Poitras's remarkable survival was a breath of fresh air.

When Poitras disappeared in the backcountry outside Coquitlam with three dogs, many were worried about the outcome. Crews scoured the area she was last seen from the ground and air, but were unable to find signs of her or the pups, and conditions in the area were dangerous even for experienced rescue crews.

But after two damp, chilly nights outdoors, searchers heard the dogs barking. Annette and her companions were airlifted to safety shortly after.

The public later learned she'd fallen and injured her back, but that she'd huddled with the dogs for warmth. The dogs also taught her to dig a hole before she lay down to get the wet earth out of the way. To repay the favour, when she noticed one of the dogs shivering, she gave it her jacket.

During her time in hospital, two of the dogs paid a visit to Annette. She was released five days after her rescue, and told reporters, "I'm going to go home, I'm going to lie on that couch and just be thankful I'm here."