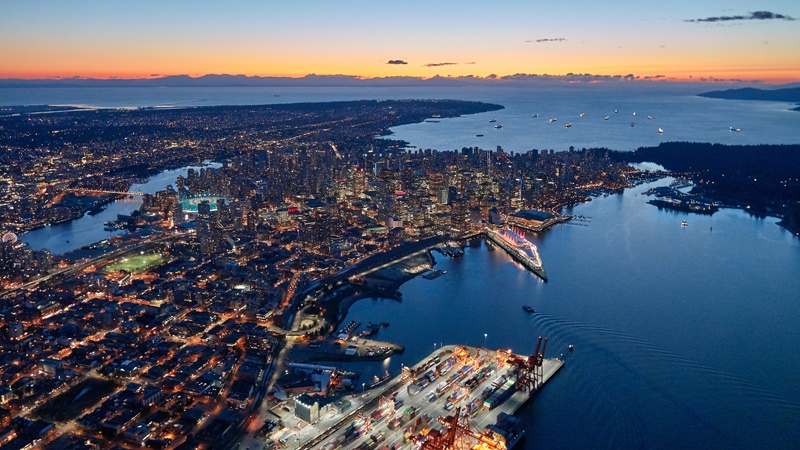 CTV's Pete Cline captured the Vancouver skyline during a flight in Chopper 9 on Feb. 20, 2018.

VANCOUVER -- As many British Columbians prepare for the Family Day long weekend, here's a look at closures, events and activities happening in and around Vancouver this year.

TransLink says buses, SkyTrains and SeaBuses will operate on their Sunday and holiday schedules, and holiday fares will apply. That means one fare zones will not be in effect on Family Day, and passengers will only need to pay for one zone no matter where they're going.

The West Coast Express will not be running on Monday, and the Compass customer service and lost property offices will be closed.

Those living outside Metro Vancouver and looking to take BC Transit buses can expect them to be running reduced service schedules. Information on schedules in specific regions can be found on the BC Transit website.

Most retailers, restaurants and bars will be open to Family Day crowds, although some will be on a reduced schedule.

Large malls such as Pacific Centre, Oakridge Centre, Park Royal and Metrotown will be running on a Sunday schedule, which is usually from 11 a.m. to 6 p.m. or 7 p.m.

Public schools across the province will be closed for the day. Regular classes will resume Tuesday.

There will be no classes at most local colleges and universities on Family Day, though many campus facilities, such as libraries, will remain open.

Monday, Feb. 17, also marks the beginning of the mid-term break at UBC, SFU and Langara College. BCIT will be closed for the day.

Most of the big attractions in the Vancouver area will be open on Family Day, including the Vancouver Art Gallery (which is offering free admission for children 12 and under and family tours of the current Cindy Sherman exhibition), Capilano Suspension Bridge, Grouse Mountain (which is holding special events in partnership with CTV) and Science World.

The provincial government subsidizes free events at parks and recreation centres, as well as museums and cultural centres around B.C.

The emergency departments at major hospitals including Vancouver General, Lions Gate and St. Paul's will be open as usual.

However, many doctors' offices are likely to be closed, so it's advisable to call ahead before showing up.

Major banks such as TD, HSBC and Vancity will be closed on Monday.

Those unsure about whether their bank will be open should check online on call in advance.

Online banking services will be available as usual.

It's important to note that Family Day is a provincial holiday, not a federal one. As such, federal government services such as passport offices and Service Canada locations will remain open.

Provincial offices, on the other hand, will be closed. These include ICBC locations (the Dial-a-Claim phone line remains open 24/7) and ServiceBC.

All branches of the Vancouver Public Library will be closed on Family Day with the exception of the Carnegie Branch on Main Street, which does not close for holidays.