The debris starting dropping at around 1:30 p.m., crashing onto roofs and windshields and turning the eight open lanes of the bridge into a winter motorist’s nightmare.

A piece of ice plummeted onto driver Keith Pearce’s Jeep, leaving a deep dent on the driver’s side of the hood. He said the falling ice looked like “grenades going off” as it hit the roadways around him.

“You were basically just looking up and hoping and praying that nothing lands on your vehicle,” Pearce said.

Pictures posted to Twitter showed a number of destroyed windshields that were allegedly hit by ice, and user James Lepp tweeted that “snow bombs” falling from the support wires above the bridge broke his rear view mirror.

ICBC said it has already received a staggering 60 claims from people who said their cars were damaged on the Port Mann Wednesday.

Mounties confirmed two people were hurt, but could not say how badly they were injured. Sgt. Peter Thiessen said an ambulance was called to help at least one of them.

Authorities closed the bridge in both directions from about 2 p.m. to 6 p.m., when they deemed it was once again safe to cross.

The Transportation Investment Corporation, a Crown company tasked with implementing the $3.3 billion Port Mann/Highway 1 Improvement Project, said the mishap is not unique to the new toll bridge.

“Snow can accumulate on any structure over roadways, and no bridge is immune to it, but what we saw today was a very unusual combination of winter conditions,” company CEO Mike Proudfoot said.

But engineering professor Dr. Perry Adebar from the University of British Columbia said the design of the Port Mann may have made it more prone to such mishaps.

While bridges like the Alex Fraser have cables running perpindicular to the roadways, the cables on the Port Mann converge at two towers located in the middle of the bridge – effectively stretching directly above traffic.

“If snow and ice accumulates on the inclined cables, and then melts and falls from the cables, much of it will fall onto the roadway,” Adebar said in an email.

Proudfoot defended the layout of the bridge, saying it was designed so that ice would slide down the cables and off the sides, as opposed to dropping onto the roadway.

With a report from CTV British Columbia’s Mi-Jung Lee 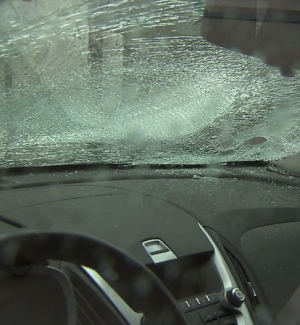 CTV News has compiled some of the best visuals of the damage done by falling ice on the Port Mann Bridge Wednesday.