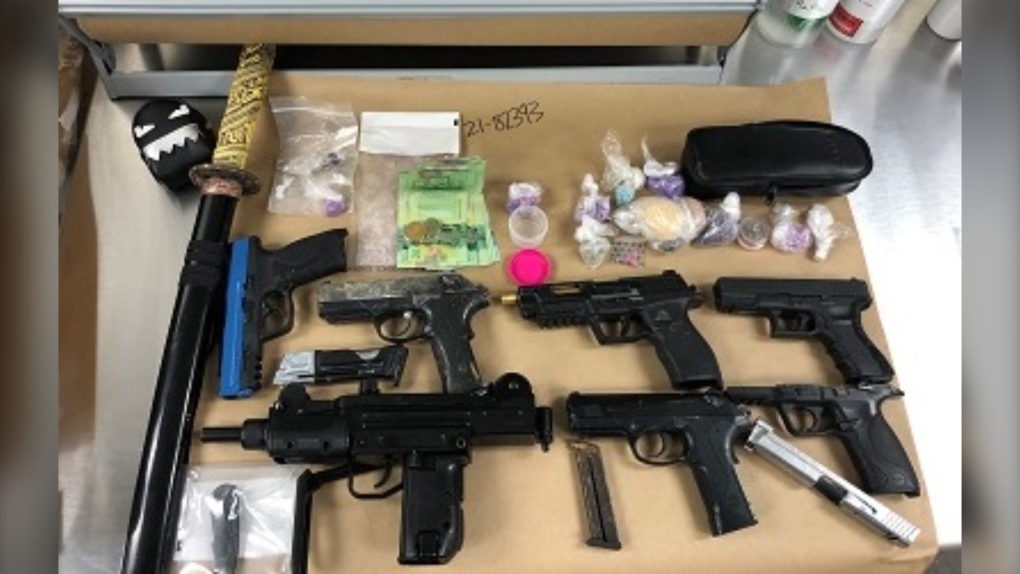 Mounties in Surrey say they've seized more than 200 grams of fentanyl, several imitation firearms and a sword during recent traffic stops in the city. (Surrey RCMP)

VANCOUVER -- Mounties in Surrey say they've seized more than 200 grams of fentanyl, several imitation firearms and a sword during recent traffic stops in the city.

The first incident happened on June 4 around 4:40 p.m., when frontline officers stopped a driver near the intersection of 94 Avenue and King George Boulevard.

"During their interaction with the driver, the officers observed items consistent with drug trafficking and arrested the driver and passenger," Surrey RCMP said in a news release issued Thursday.

Upon further investigation, officers found seven imitation firearms, a pistol magazine with live ammunition inside, a knife and a sword. They also seized multiple packages of drugs, containing a total of 157 grams of suspected fentanyl, police said.

The 34-year-old man and 34-year-old woman were released at the scene after their arrest, police said, adding that a report would be forwarded to the BC Prosecution Service.

The second incident happened at 6:50 p.m. on June 8 near the intersection of 176 Street and Fraser Highway in Cloverdale.

Officers pulled over a vehicle and "saw evidence of weapons possession" as they talked with the driver, according to another news release from Surrey RCMP, also issued on Thursday.

"He was also served a warning letter as the registered owner of a vehicle involved in crime, that in the future if this vehicle is involved in criminal activity, it will be seized as offence-related property," police said in their release.