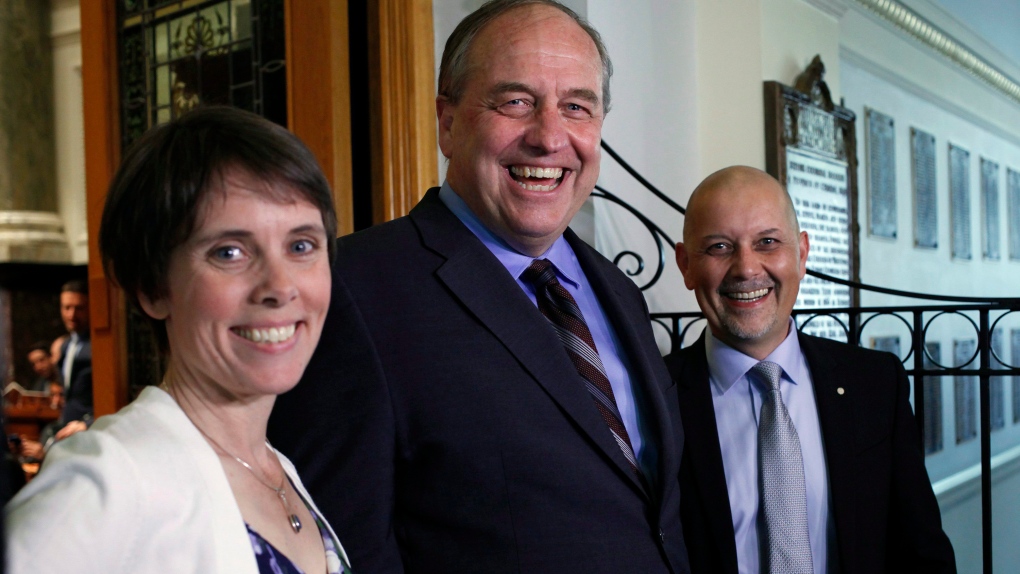 B.C. Green Caucus elected MLA's Sonia Furstenau, Andrew Weaver and Adam Olsen wait outside the legislative assembly before officially being sworn in as members during a ceremony at Legislature in Victoria, B.C., on Wednesday, June 7, 2017. (Chad Hipolito/The Canadian Press)

VANCOUVER -- During some idle moments Saturday night, the former leader of the B.C. Green Party decided to let loose on his former colleagues on Twitter.

In response to a tweet from Green MLA Sonia Furstenau floating the idea of a four-day work week, Andrew Weaver called the concept "kooky" and snarked that "it's far more complicated than just a few sound bites & a tweet. Perhaps u should do background research before shooting from the hip."

This is an absolutely kooky idea. We aren't New Zealand. U clearly haven't thought this through as it's far more complicated than just a few sound bites & a tweet. Perhaps u should do background research before shooting from the hip. Classic decision-based evidence-making #bcpoli

In another tweet sent about an hour later at 11:16 p.m., Weaver took aim at both Furstenau and Adam Olsen, another Green MLA.

"My former colleagues @AdamPOlsen & @SoniaFurstenau were afraid to stand up to the BC NDP (with regards to) the LNG development," he tweeted. "I was ready to go to election, but in my opinion, they were more interested in re-election than they were about standing up for @BCGreen principles."

My former colleagues @AdamPOlsen & @SoniaFurstenau were afraid to stand up to the BC NDP wrt to the LNG development. I was ready to go to election, but in my opinion, they were more interested in re-election than they were about standing up for @BCGreen principles.

Weaver was first elected to the B.C. Legislature in 2013, the first Green Party MLA to ever be elected. In the 2017 provincial election, the party achieved an electoral breakthrough when Furstenau and Olsen were also elected, and Weaver was re-elected. The party and the three MLAs held a unique position in B.C. politics when they signed an agreement with the B.C. NDP to support the NDP on confidence votes, which set the stage for the B.C. NDP to form a minority government.

But Weaver stepped down as party leader at the end of 2019, and announced he would sit as an independent MLA in January of 2020.

Furstenau, who is now running to lead the B.C. Green Party, said she, Olsen and Weaver had voted together in opposition of a bill to support the province's liquefied natural gas (LNG) industry.

"All three of us voted against Bill 10, which gave a pretty generous taxpayer–funded subsidy to the LNG industry. We voted against it 14 times," Furstenau said.

"We were steadfastly opposed to it, but the BC NDP had a partner in the BC Liberals in moving that legislation forward."

When it comes to Weaver's dismissal of the idea of a four-day work week, Furstenau said the idea is a well-established one that has been studied by economists and tried by some companies, such as Microsoft Japan.

Furstenau said some research has shown that a four-day work week makes employees more productive and less stressed. She said she believes it's an idea worth considering and debating as the province moves towards economic recovery as the COVID-19 pandemic eases.

"How do we make it a green recovery, a just recovery, a recovery that is better for working people," Furstenau said.

Furstenau added she had heard from many women about the benefits of a four-day work week.

"A lot of women … were saying it meant that they never took any sick days, it meant they were able to get to appointment with their children, have that flexibility built in and have that little bit of extra leisure time which really helps us with our recovery from what is a fairly gruelling work-week," Furstenau said.

Furstenau said she is not worried about what people are saying about her on Twitter.

"I think if I worried about Twitter I wouldn't have the time I need to spend on looking at bringing forward really good ideas for the future," she said.