'Ever given anyone $20M?' John Cleese on Canadian tour to finance retirement, divorce 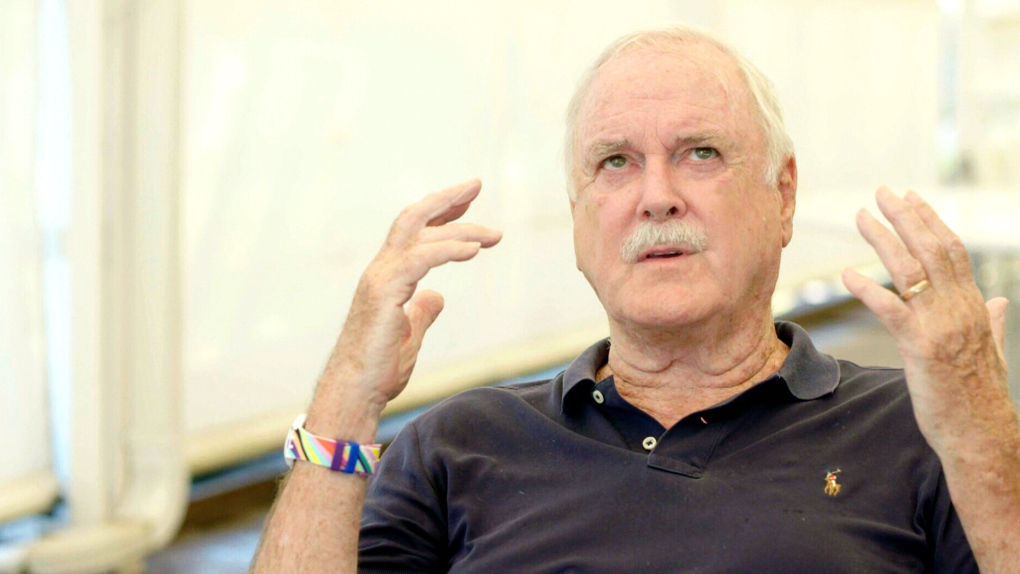 John Cleese speaks to CTV's W5 about his long career in comedy in this March 2019 file image.

TORONTO - John Cleese is shopping for an island villa and hopes his Canadian fans might help him finance it.

The Monty Python comedian recently settled into a temporary home on the Caribbean island of Nevis, a getaway of beautiful resorts and sandy beaches, and once he can afford it, Cleese says he'll be looking for a more permanent spot in a sunny destination.

“I don't like cold, I'm against it,” Cleese firmly insisted during a phone interview from his rented villa at the island's Four Seasons resort.

“How Canadians do it, I simply do not understand. Getting through the English winter is like trying to get through the First World War - you don't know if it's ever going to end.”

The star of “Fawlty Towers” and “A Fish Called Wanda” might be sorely disappointed as he kicks off his Canadian tour during a very chilly spring that's sweeping much of the country.

He returns in November for a newly announced round of shows in Victoria (Nov. 4), Thunder Bay, Ont. (Nov. 8), Calgary (Nov. 10) and Montreal (Nov. 18), and delivers a special performance of his previous act “See Me Before I Die” in Winnipeg on Nov. 6.

The 79-year-old comedian spoke with The Canadian Press about reacquainting himself with Canada, finding humour in political turmoil and the lingering possibility of retirement.

CP: Six years ago you embarked on the Canadian leg of your “Last Chance to See Me Before I Die” tour. It seemed like a farewell, but here you are hitting the road again. What drew you back?

Cleese: I'm hitting the road again, as you rightly put it, because I still don't have rosy finances. I've done a lot of work for the BBC, which is more or less working for charity. If I had been in a “Friends,” “Cheers” or a “Frasier,” I wouldn't have these problems. When I ran into this whole divorce I had to give this woman $20 million. So I have very good income, but I don't have very good capital. And I want to buy a home somewhere in the sun, so this year I'm doing some touring.

CP: But several years ago you said you were nearly finished paying off your divorce settlement. That's not the case?

Cleese: Well I'm still paying off my ex-wife, I don't know if you've ever - have you ever given anyone $20 million?

Cleese: It's quite a lot.

CP: How about your live show, which you're calling “Why There Is No Hope.” Is there really no hope?

Cleese: No hope as a society. You have to realize it's basically hopeless and you can do very little about it. Most of the trouble in the world is caused by egos, people who want to be very powerful, very rich - or often both. People at the top of organizations and churches even, they're the power seekers. What I'm saying is there's an infinite possibility for joy in your own life, but there's a very considerable limit to what you can achieve in society... That's quite a serious answer, wasn't it?

CP: How do you laugh these days when there's so much political and social turmoil?

Cleese: Well because I'm very happy. I mean, it does affect me. I read a few days ago that (Israeli prime minister Benjamin) Netanyahu was going to form a government again, this is the fifth time, and I was depressed until lunch. You can't do anything about it. On the other hand, what I can do is roar with laughter. This morning my wife crept up on me and made me scream with fear by attacking me from the rear while I was at my computer. That made me laugh. The main thing is don't get pompous because pompous leads to psychic death.

CP: All this negativity you're speaking about seems to thrive on Twitter, which you regularly use. Why is tweeting so appealing to you?

Cleese: I wasn't interested in social media at all, and then my good friend Stephen Fry said to me: “John you don't understand - if you have a big Twitter following then you can advertise your appearances without having to go through the very disgusting British press.” When I realized that, I thought, “Well that makes sense.” In the old days I'd do an interview with a British newspaper and they would explain to everyone what a really unpleasant, difficult, and unfriendly bastard you were, and that you weren't talented anyway. Then in the last paragraph they'd say, “Oh, by the way he's appearing in a theatre in Plymoth on Thursday.”

CP: But Twitter can be a hostile environment when you're putting your opinions out there. You really want to engage?

Cleese: A lot of that hostility is an exchange of insults and it's really just pointless. I did a tweet a couple days ago saying Winston Churchill said when he was being fired at - and not being hit - it was an exhilarating feeling. I feel (that way) about the people insulting me. I love being insulted by halfwits, it just makes me feel good... the right wing ones - (it's) extraordinary how usually their tweets are either misspelled or mispunctuated.

CP: As you embark on your tour, have you considered whether retirement is on the horizon?

Cleese: The thing is, if you're a freelancer you don't have to retire... I can go on writing until I'm 95. If I had enough money to buy myself a nice home, I would stop touring - except now and again, because it's fun to get out there in front of an audience. As you get older, if you manage to save your money more successfully than I have, you do things you want to without much thought for how much it's bringing in.

This interview has been edited and condensed for clarity