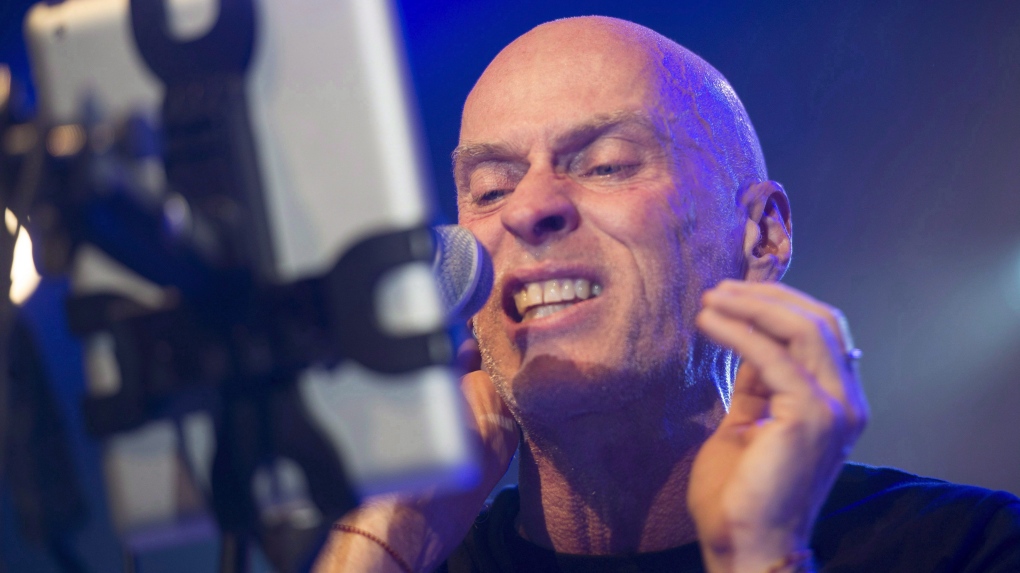 Spirit of the West frontman John Mann, who suffers from Alzheimer's, uses an iPad to assist him as he performs his final concert in Vancouver, Saturday, April 16, 2016. (THE CANADIAN PRESS/Jonathan Hayward)

VANCOUVER -- Being told he was too young to have Alzheimer's disease would always catch Jim Mann off guard, but it was a nurse's comment dismissing his condition that really stung.

“She looked me up and down and said, 'Well, you look fine,' ” said Mann, who was 58 when he was diagnosed with early-onset Alzheimer's, a term used when the form of dementia strikes people under age 65.

Mann, now 71, said the nurse made the remark in an emergency ward six years ago while he was there for an unrelated concern and mentioned he'd need his wife, Alice Mann, to stay with him because he had Alzheimer's disease.

Mann is a passionate advocate for Alzheimer's patients as a volunteer with the Alzheimer Society of British Columbia and said the awareness that Spirit of the West lead singer John Mann, no relation, created before his death this week will go a long way toward educating the public about the condition that can come with a lonely and isolating existence.

“It's a cognitive disorder,” he said. “It almost gives people licence to make jokes about it or to question the legitimacy of your diagnosis just because it isn't physical.”

Alzheimer's patients already face enough stigma but those who are diagnosed at a younger age deal with more of it, Mann said.

“The biggest thing is questioning of the diagnosis because you're able to have a conversation. The assumption is you don't have it, period. I had someone say to me, 'You don't have a diagnosis. Look how well you're dressed.' ”

Mann decided to see his doctor when he started becoming increasingly disoriented, disorganized and forgetful, often stopping in the middle of a task in the kitchen and trying to figure out what he was supposed to be doing next and even leaving the stove on.

His advocacy work has given him a purpose, and that's what he said patients need to focus on so they have a reason to get out of bed in the morning.

John Mann, whose work as a songwriter for the Vancouver-based band earned him four Juno nominations, died Wednesday at age 57, five years after he announced he had early-onset Alzheimer's disease.

In 2016, the documentary “Spirit Unforgettable” captured the toll the disease had on his ability to perform but it is also a great educational tool to create awareness of the ravages of the disease, Jim Mann said.

The singer, along with his wife Jill Daum, also shared their story at events hosted by the Alzheimer Society of B.C.

Dr. Haakon Nygaard, a neurologist at the University of British Columbia's faculty of medicine, said Alzheimer's weakens the body because patients often lose their appetite and can't sleep, becoming frailer and sometimes die of pneumonia or heart failure.

Patients with an early-onset diagnosis face greater challenges because they often have children still living at home and find themselves trying to keep pick-up and drop-off schedules straight while their performance at work also suffers, he said.

However, many of the services available for Alzheimer's patients are geared toward seniors.

“What's frustrating for us is that younger individuals have trouble accessing the right resources,” Nygaard said.

More patients are being diagnosed with Alzheimer's at an earlier age, and that may be because of greater awareness created by John Mann and others, he said.

Sharon Tong, support and education co-ordinator for the Alzheimer Society of B.C., said she links patients and families with resources in Cantonese and Mandarin, though services are also offered in Punjabi.

Shame often keeps people from revealing an Alzheimer's diagnosis, which is sometimes wrongly connected to mental illness or myths about eating certain foods or having some connection to metals, she said.

In April, the society launched a help line in Chinese that some people feel more comfortable calling rather than asking questions in person, Tong said, adding she also facilitates community workshops and forums with guest speakers including doctors and nurses who provide education.

The society also recently developed an initiative in partnership with the City of Vancouver to train city workers and volunteers on how best to support community members living with dementia.

In January, the Alzheimer Society of Canada will launch an anti-stigma campaign for a third year with the tag line: “I have dementia. Let me help you understand.”

This report by The Canadian Press was first published on Nov. 22, 2019.