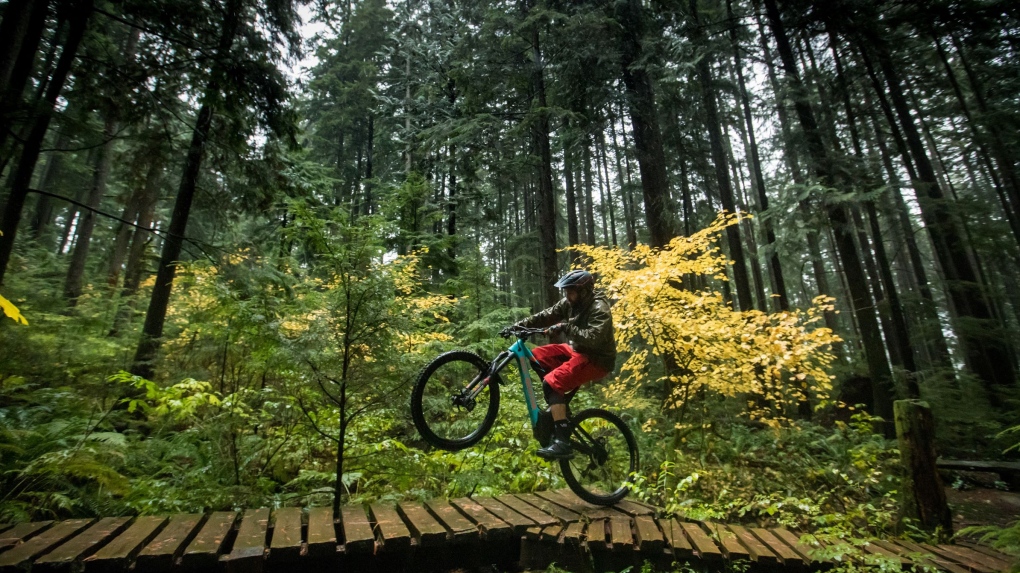 Wade Simmons rides his electric-assist mountain bike on Mount Fromme, in North Vancouver, on Sunday October 20, 2019. Athletes, recreationalists and industry members say the trend of e-bike use is opening trails to new riders, giving established mountain bikers more freedom to spend more time outside and creating some concern about the impact on sensitive ecosystems. THE CANADIAN PRESS/Darryl Dyck

SQUAMISH, B.C. - On a sunny September weekend in Squamish, B.C., about half a dozen tourism and rental companies say they're out of electric-assist mountain bike rentals.

The rugged and varied terrain of British Columbia's Sea-to-Sky region north of Vancouver has long made it an international mountain biking destination but now the trail systems are increasingly being used by cyclists riding with some extra juice.

Athletes, recreationalists and industry members say the trend is opening trails to new riders, giving established mountain bikers more freedom to spend more time outside and creating some concern about the impact on sensitive ecosystems.

“This is the first seismic shift in mountain biking. This is like, holy smokes, things are really different,” said former professional mountain biker Wade Simmons.

Widely hailed as the “Godfather” of freeriding, Simmons was inducted into the Mountain Biking Hall of Fame in 2010.

He now works in sales for Rocky Mountain Bicycles and said when the company introduced its e-bike inventory to dealers in the United States this spring, it closed the gap between riders of varying abilities during a demonstration ride.

“We had road bike riders, out of shape guys, but we were all riding together for two hours, which would have never ever happened on a normal bike,” Simmons said.

In response to the growing popularity, BC Parks introduced a new e-bike policy this summer. It allows e-bikes in certain areas, depending on classifications already established by the industry and other government bodies. It aims to help protect sensitive wildlife, ecosystems and cultural values.

“Cycling in parks can have an impact on trails and wildlife. Electric bikes allow more riders to use trails and reach areas that were previously limited to a few visitors, leading to increased pressure on sensitive wildlife and ecosystems,” the government said.

Some local governments are also looking to regulate where e-bikers can roam.

Whistler council recently supported a draft policy for electric powered personal mobility devices, including e-bikes, on recreational trails in the municipality. It prohibits them from some specific high alpine environments that could be vulnerable to damage, as well as a conservation area.

Mayor Jack Crompton said it comes in response to a “dramatic increase” in the use of e-bikes in the resort municipality, adding that policies around emerging technologies like e-bikes should be flexible and responsible.

On the whole, he sees e-bikes as a positive addition to the recreation landscape.

“My hope is that we see more community members on e-bikes and more people being more active, longer,” Crompton said.

Simon Quinn-Sears, rental manager at Corsa Cycles in Squamish, said it's a myth that e-bikes are only for the aging and injured. He's a 32-year-old, able-bodied man and he said he prefers it to using a traditional mountain bike.

“You feel like a superhero because there's no throttle, it's not like riding a dirt bike or power sports thing,” he said.

The engine's output reflects the energy you put into it, so the harder you peddle the more power you're provided.

Traditional mountain biking is fine for people who want to earn their laps through a high-intensity workout but in his case, Quinn said his heart rate is 30 beats a second lower, which is in his target range.

“For me, I'm getting better exercise, I'm having more fun and I hurt less the next day so I'm riding more,” he said.

E-biking isn't for everyone. Cooper Quinn, president of the North Shore Mountain Bike Association, said he doesn't own one.

“Part of the reason I ride bikes is for the physical exertion aspect of it,” he said. “That's an aspect of the sport I enjoy.”

Most of the association members still use a traditional mountain bike as their primary ride, but member surveys show they have been adding e-bikes to their rosters over the past five years or so, he said.

Quinn sees advantages in e-biking for others, especially aging riders, out-of-practice riders who want to keep up with their friends and new riders daunted by big hills.

For now, he said most people who use e-bikes are established riders.

“It's going to be an interesting user group to monitor over the next few years as it continues to grow,” Quinn said.

Quinn noted that many trails are maintained by volunteers working through associations like his.

“There's certainly management challenges associated with it. As a great surprise to no one, trails in B.C., trails on the north shore and across Canada are getting busier as people start to do more and more recreation. So, putting another group of users out there is certainly a challenge,” he said.

This report by The Canadian Press was first published Oct. 21, 2019.