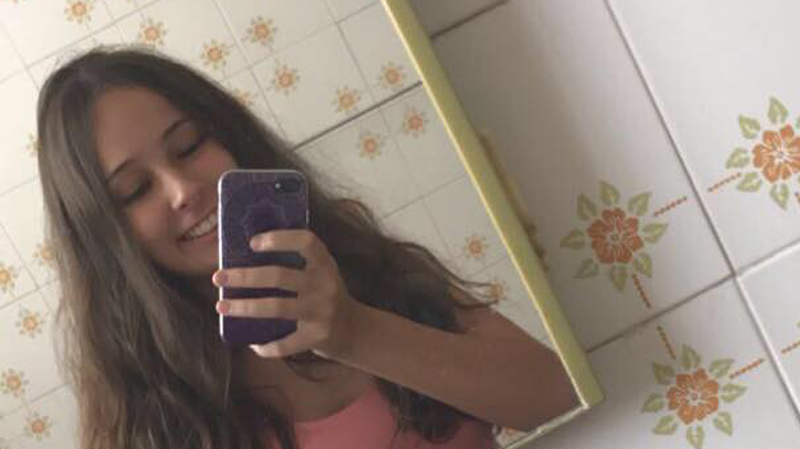 Fernanda Girotto, a 14-year-old Brazilian exchange student, was killed at a Burnaby crosswalk in January 2018.

VANCOUVER -- Two men have been found guilty of driving without due care and attention in connection with the 2018 death of a Brazilian exchange student in Burnaby.

Fernanda Girotto was walking in a marked crosswalk on Cariboo Road south of Highway 1 around 7 a.m. on Jan. 17, 2018 when she was struck and killed.

It was alleged the 14-year-old was hit by one vehicle, then struck again by a second as she lay injured in the crosswalk.

"It was an accident. Nobody wanted this to happen," said Kai Man Cheu, the driver of the second vehicle, a Toyota Camry, as he left the courthouse.

Girotto died at the scene after being dragged more than 40 metres. She was on her way to catch the bus and planned to go snow tubing.

Paul Oliver Wong was behind the wheel of the first vehicle, a Dodge Dakota pickup truck.

Wong spoke in his own defence at trial back in November 2019.

He sobbed as he described checking to see if the girl was still alive.

"There is no winner in a case like this. My client is very traumatized by this,” said David Fai, Wong’s lawyer.

Wong told the court he'd checked both sides of the road for pedestrians and didn’t see Girotto until the last second.

Then he "swerved and braked."

Wong, who was 46-years-old at the time, said he couldn't find her at first, but then noticed a second car stopped nearby.

He said he found the teenager underneath that vehicle and called 911.

Wong described dark and rainy conditions and seeing the top of a figure in front of his pickup truck wearing a dark hoodie pulled up over their head.

"He was driving in a dark rainy morning and he didn't see a pedestrian in the crosswalk. It could have happened to anyone," argued Fai.

Cheu and Wong were charged with driving without due care and attention and other Motor Vehicle Act violations in connection with Girotto's death.

In his judgement, St. Pierre called the pair hardworking and exemplary citizens, adding they were not impaired or driving above the speed limit.

Wong and Cheu remained on scene after the crash and cooperated with authorities.

In the end though, the judge ruled that both men were guilty of driving without due care and attention but were granted a conditional stay on the remaining charges.

St. Pierre said his decision was largely based on the belief that if the men couldn’t see properly, they should have slowed down or pulled over.

"Even though it was a dark rainy morning, clearly they weren't paying attention," said Crown counsel Geordie Proulx.

Yun Li-Reilly, a litigator with Farris LLP, told CTV News Girotto's family in Brazil is "devastated" as details emerge from the trial.

"The family hopes this conviction will serve as an example to other drivers to encourage them to drive their vehicles defensively," read Li-Reilly from a statement on behalf of the teen’s mother, father and sister.

The City of Burnaby installed lights at the crosswalk within a week of Girotto's death.

"The family hopes that further innocent victims will not have to die in order to affect improvements on the roads or the driving ability of those who use our roads,” Li-Reilly read to CTV News.

The Girotto family has not said if it's considering a lawsuit against the drivers or the City of Burnaby.

A date for sentencing will be set Monday. The Crown is seeking a fine and driving prohibition.