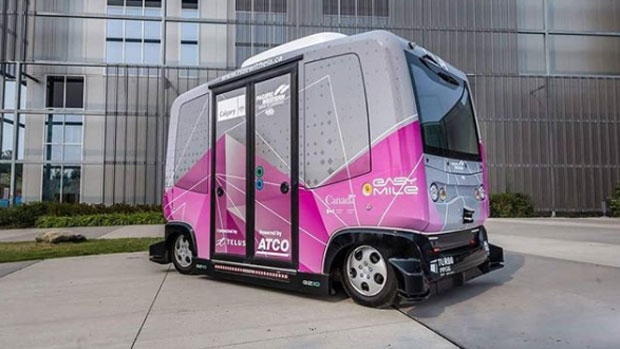 Vancouver residents are invited to get a glimpse of the future by riding in an autonomous vehicle.

The driverless shuttle, also known as ELA, will be in the city as part of a joint application with Surrey in the Smart Cities Challenge.

The joint bid is one of five finalists to win the top prize of $50 million for improving the lives of residents in urban areas.

The driverless shuttle demos will continue in Surrey until Sunday. Vancouver will get its turn from Feb. 23 until March 3.

“This is the first time that autonomous vehicles are being considered for large-scale use in the Lower Mainland,” Surrey Mayor Doug McCallum said in a news release earlier this month.

“In Surrey and Vancouver, we believe that together we are leading the way and setting the standard for other cities in Canada to follow for smart mobility,” he said.

The ELA is 100 per cent electric and uses sensors, cameras and computers to analyze its surroundings as it travels, thereby eliminating one of the leading causes of collisions – human error.

It’s a technology that is already being used in several countries around the world. It’s supposed to improve safety, enhance sustainability and reduce congestion on busy traffic routes.

The driverless shuttle has a maximum speed of around 40 km/hr. But during demos, it travels at about 12 km/hr and can carry up to 12 passengers.

There will be two pickup locations in Vancouver for free shuttle rides. For more information or to book a ride on the shuttle, visit the Smarter Together website.