Driver pulled over twice 'within minutes' for speeding in a school zone: Surrey RCMP

Driver pulled over twice 'within minutes' for speeding in a school zone: Surrey RCMP 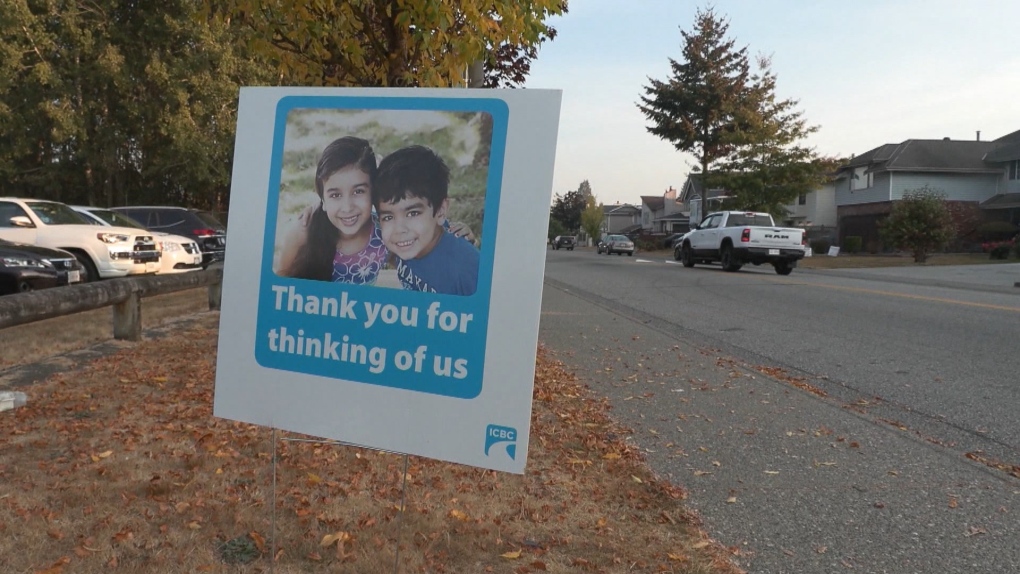 Surrey RCMP have teamed up with local elementary school students for the "Think of Me" campaign, which sees officers set up roadblocks in school zones and hand out hand-drawn messages from students intended to encourage drivers to avoid speeding and distracted driving.

Mounties in Surrey say they pulled over the same driver for speeding two times "within minutes" last week.

The incidents happened as part of a two-day operation enforcing speed limits at school and playground zones in the Port Kells neighbourhood.

The designated zones are located on 88 Avenue between Harvie Road and 196 Street, according to a news release from Surrey RCMP, and officers were there on Sept. 27 and 28.

Officers issued approximately 40 violation tickets during the enforcement operation, and two of those tickets were given to the same driver, Mounties said.

"The driver was pulled over in the school zone, and only minutes later (with the original ticket still in hand) pulled over by a second officer in the playground zone," police said. "In both instances the driver was travelling over double the posted 30 km/h limit, and two $253 tickets were issued."

Surrey RCMP said they conducted the operation in part because residents and community members had expressed concern about speeding in the area.

According to police, radar deployed in the area logged 41,859 vehicles that passed through. Of those, 85 per cent were travelling at 67 km/h or faster, despite the posted 30 km/h zone.

"Our dedicated traffic officers conduct enforcement and issue tickets to change driving behavior and make our roads safer for everyone," said Cpl. Vanessa Munn, media relations officer for Surrey RCMP, in the release.

"Remember to do your part by watching your speed in school, park and construction areas in order to minimize collisions and keep pedestrians safe."

Police said they have also recommended that the City of Surrey increase signage along the stretch of road in question.

Surrey RCMP have also teamed up with local elementary school students for the "Think of Me" campaign, which sees officers set up roadblocks in school zones and hand out hand-drawn messages from students intended to encourage drivers to avoid speeding and distracted driving.

Police say 43 children are injured in collisions at school and playground zones across the Lower Mainland each year.

Montreal Canadiens goalie Carey Price has taken a stance against Ottawa's controversial Bill C-21, which would refine the definition of prohibited assault-style firearms -- drawing the ire of Canadian hunters who say the definition would outlaw weapons used within their practice. Meanwhile, the Liberals have repeatedly stated their intention is not to go after hunters but to restrict certain firearms designed for the "battlefield."

As Musk is learning, content moderation is a messy job

Since the world's richest man paid $44 billion for Twitter, the platform has struggled to define its rules for misinformation and hate speech, issued conflicting and contradictory announcements, and failed to fully address what researchers say is a troubling rise in hate speech.

Peel police are searching for a murder suspect who was last seen running away from a Mississauga gas station.

New research has found that climate change could cause more than 100,000 tonnes of micro-organisms to be released into natural ecosystems every year, a result of melting glaciers in the Northern Hemisphere. The ramifications of this, however, remain unknown.