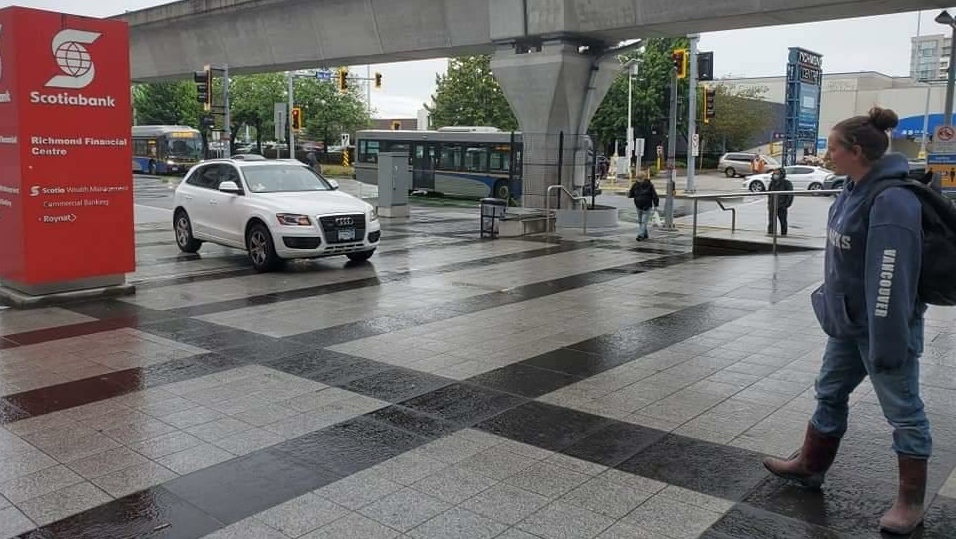 A pedestrian looks on at an Audi that was parked in the middle of a pedestrian plaza at the Canada Line SkyTrain Brighouse Station in Richmond, B.C.

VANCOUVER -- Transit police say they have fined a woman hundreds of dollars and docked points off her license after she parked in the middle of a Canada Line pedestrian plaza.

Photos of the incident at the Canada Line Brighouse Station in Richmond were shared to Twitter on Friday by police, however they did not specify when the incident occurred.

“While patrolling Brighouse Station, officers saw this driver drive past the 'Do Not Enter' signs and (drive) onto the sidewalk, so that she could use the ATM at the bank,” reads the tweet from the Transit Police Enforcement Team.

Photos of the incident show a woman getting out of a white Audi SUV, while a few people walking across the plaza look on in disbelief. The SUV is parked next to a large Scotiabank sign, and within metres of the station gates and ticket machines.

“This transaction netted her hundreds of dollars in fines and four points on her license,” reads the Tweet from police.