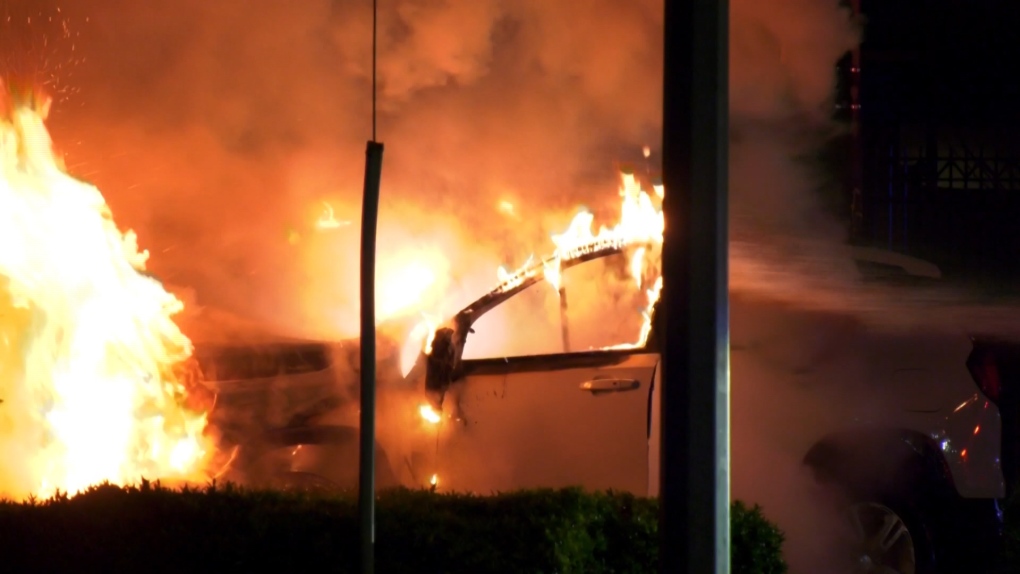 Video from the scene shows fire crews hosing down the white SUV, which has flames pouring out of its interior and from under its hood. (CTV)

VANCOUVER -- An SUV burst into flames after a two-vehicle crash in Burnaby in the early hours of Saturday morning.

The incident occurred around 3 a.m. at the intersection of Boundary Road and Henning Drive, according to Burnaby Fire Department Asst. Chief Barry Mawhinney.

Video from the scene shows fire crews hosing down the white SUV, which has flames pouring out of its interior and under its hood.

Mawhinney told CTV News Vancouver crews were able to extinguish the fire fairly quickly, without it spreading to the bush in which the vehicle had crashed.

Firefighters were not aware of any injuries resulting from the crash or the blaze, Mawhinney said, noting that the driver of the burning vehicle appeared to have fled the scene.

Both Vancouver police and Burnaby RCMP responded to the crash, and Mawhinney said Mounties "caught up with" the driver a short time later.

CTV News Vancouver has reached out to both police agencies for more details. This story will be updated if and when responses are received.