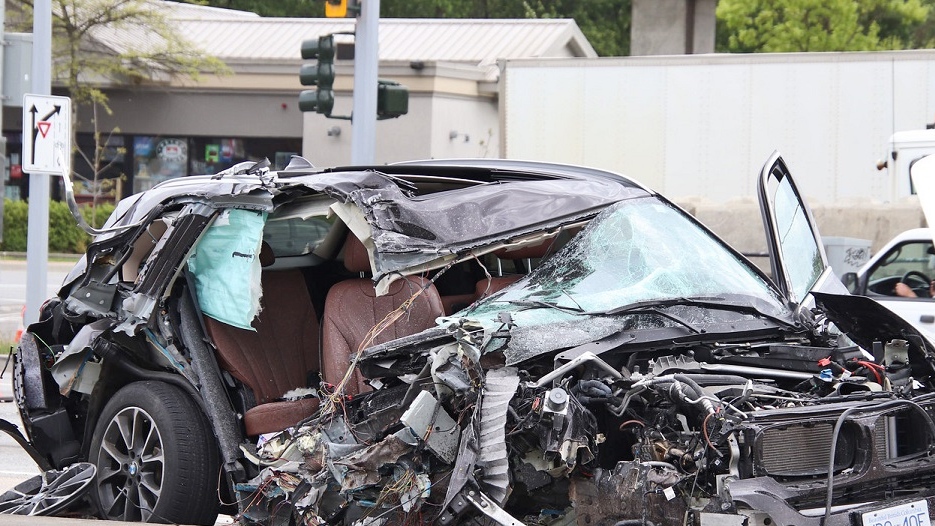 A damaged vehicle is pictured at the scene of a crash in Surrey on Thursday, May 6, 2021.

VANCOUVER -- Three vehicles were involved in a serious crash in Surrey Thursday that resulted in two of the three drivers to hospital.

The crash happened shortly before 1 p.m. Thursday at the intersection of King George Boulevard and 128 Street, the local RCMP says.

It is not known what caused the three-vehicle crash, but a reconstruction team has been called to help in the investigation.

The driver of one vehicle, a woman, was taken to hospital with serious injuries. Another driver was shaken up, but police say he was not seriously injured.

The third person involved in the crash is alleged to have left the scene on foot. Police said he was found later at a hospital in the area. They have not provided details on his injuries.

Mounties warn the intersection is closed, and will be for several more hours. Members of the public are asked to take another route.

The RCMP said traffic is also impacted on the Pattulo Bridge as a result of the crash.

Anyone with more information is asked to contact the RCMP detachment or to call Crime Stoppers anonymously.